The curious case of the cMOOC 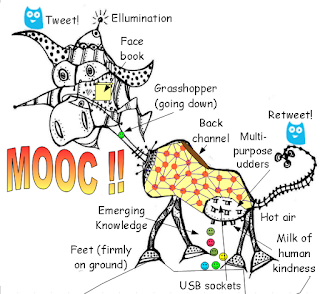 Moving along in NRC01PL, here are some reflections of what was presented in week 3 of the Personal Learning MOOC.  It's been rather busy at work, and at Athabasca as I am wrapping up my semester, so I haven't really gelled with anyone else in this cMOOC.  I think that the topic would be interesting to discuss in connectivist fashion, but I have not yet (satisfactorily) done any wayfinding. I see some friends from other MOOCs in the twitter stream (like Autumm and Jupidu), but don't see much in the place of discussion.  Maybe once I "catch up" I'll pay more attention to what others are doing?  I am getting a similar vibe now to the one I got in the Wiley MOOC on OpenEd (#ioe12)  - I am in a museum tour, and I am a few rooms behind the group.  Good opportunity for mischief and creative exploration, but it's always fun to have another friend around to share the experience with.

In any case, in week 3 the topic was the (curious) case of the cMOOC, where Stephen discusses a little bit about the connectivist MOOC (aka "original" MOOC), and how things connect with it.  It seems that Stephen really likes the number 2, either with zeroes before it (e.g. 0.0002) or after it (e.g. 2,000) ;-).  In the two recorded live sessions there was talk of traditional classes versus cMOOCs, and one of the power of ten, which is where I gathered that Stephen really likes "2" ;-)

Stephen talks about the classic course model as following a linear path, which can be recognized as follows:

Stephen also went through and showed us the back-end of Moodle...well, the teacher end of things (not the server admin level), and gave us an overview of that.  Having used Moodle to teach I've seen (and used) this before but it really did remind me of the criticism of  traditional courses as being (potentially) too linear. I think this is a valid issue when we think of Moodle as the use case.  Moodle is way too linear, and I see this with my doctoral courses (Athabasca uses Moodle).  I think that a linear structure is perfectly fine for courses that aim to keep things simple and to really scaffold students who are new to online learning (and perhaps rusty with structured learning in general), but it can be incredibly boring for some (on one of the spectrum) and incredibly confusing for others (at the other end of the spectrum) when everything about the course is just displayed on one, long, web-page. I think having some additional organizing principles would not hurt Moodle.

In any case, thinking about MOOCs in specific Stephen tells us that the big difference with MOOCs (as compared to traditional courses) is that:
A lot of these things are new, and challenging to people who've been entrenched in the traditional models of teaching and learning. For example, when we're thinking about open courses, I am reminded of a conversation a long time ago, in a meeting room far-far-away, where we were discussing courses (and how low enrollments) were. People were thinking in terms of "their" courses being offered, not as the curriculum as the whole.  I said something along the lines of "it's not about butts in seats" and the retort from someone was "What do you mean? without thinking about butts in seats how do we get paid?".  The economic motive was strong with this one.  I wasn't quite sure how to respond to this, because that's an entrenchment mentality that makes it hard to conceive of alternative modes of teaching and course offerings. Whether people need the teaching income or not is a whole other issue.

I've often thought of making the courses I teach open, and whoever is signed up (through the university) simply gets graded and credit is earned. Those who don't want to sign-up can simply enjoy as much (or as little) of the learning experience as they want. The problem is that even if I want to do this with "my" class, there are potentially university gatekeepers out there who think with the mentality of if you get the milk for free, why buy the cow?  I get it.  Budgets are tight, units need to survive and enroll students, but I think that universities really misconceive what the milk and the cow in this situation are.  Students aren't signing up for content.  We've had this content available to us in the past (in libraries). We've been part of communities of practice that help scaffold us into learning new things and existing in new situations.  What a university's job is (at least at the graduate level, I can't really speak to undergraduate education) is that of credentialing and mentoring. I joined an instructional design MEd program because I was denied jobs due to the lack of the credential (never mind that I had learned a lot on my own through book-learning and CoP memberships).  As an adjunct I am also (generally speaking - not in my specific case) not empowered to make those decisions as to whether or not to offer an open course. Tenured and tenure-track faculty have greater leeway, partly because of academic freedom.

In terms of having a mix of levels of learners in the course, I see this as both a strength of the cMOOC, and maybe a weakness.  I like being in mixed-level MOOCs because I can take the lead in my own learning, and I can set the pace and difficulty.  With xMOOCs I've often felt bored. I like the lectures (most of the time), but the (required) activities for earning a certificate can be boring.  The mixed levels work for a learner who is at least somewhat familiar with traversing a network and forming communities or sub-communities in which he can learn.  When a learner is new to this, it can feel like you're limping along (as a pedestrian) on the autobahn where Ferraris are zooming past you at 100 Mph. This can be quite demotivating to newbie learners.  So, the question is, how do we foster those newbie learners into a community, when the community itself has not fully formed yet? What sort of scaffolds and structural supports do they need to get started? I know that in Rhizo14 and 15 we had a few who felt really lost and perhaps not welcomed in our community because of this.  How do we minimize this? I think preventing it altogether may not be possible, but minimizing alienating effects could happen.

Stephen mentions Cormer's model for success in MOOCs (Orient, Declare, Network, Cluster, Focus).  I had forgotten about this.  Rebecca and I  (wow! 4 years ago!) wrote about this topic as well for Learning Solutions Magazine based on our experiences with cMOOCs at the time.  Can we, and should we, update these document and concepts for those newbies?  Athabasca University has a Learning to Learn Online MOOC, designed to help newbies into traditional online learning. Should we create a "learning to learn in MOOCs"? (if such a thing doesn't exist yet).  Something like this could potentially help newbies with the issue of over-abundance that they might experience in MOOCs (the drinking from the fire-hose).

And, how do we ensure that learners don't just focus on areas that they are comfortable with, and ignore areas that might seem too challenging? For Open Learners (those who don't pay for a credential or certification) I don't think that this is particularly an issue.  For those who want a credential, I think that this is where the Deakin Digital initiative potentially comes in.  I was unaware of this initiative, but it is definitely something to look into since they are looking at ways to unbundle formal credentialing at the university level, and it is targeted toward people in graduate education who are working professionals and not the traditional student demographic.  When we break down courses into core competencies that can be badged (with demonstrable evidence - keeping that recent @cogdog blogpost in mind ;-) ), I think we can gently push learners toward those skills/content/attitudes that they might be blind to, or just ignoring.

For what it's worth, I think it's hard to do this (open courses and badging) piecemeal.  Last year, when I offered badges for INSDSG 601, someone asked me: well, what happens with Dr. so-and-so teaches this course in subsequent semester and they don't want to deal badges? Will the students say "what about AK's students? They got badges, why can't we?"  My personal response to this is really sorry, but that was when I offered the class, and other instructors have the freedom to structure their class as they see fit.  However, this does raise a bigger issue.  What I deem as important to badge for my class(es) someone else might not. This is why it's important (IMHO) to think about this from an entire curriculum perspective and develop and deploy another program that is open and badged from the start. This way you are potentially avoiding issues like these and you can do some interesting action research on how and why things work (or don't).

OK.  Maybe I've written too much for now.  What are your thoughts on this? ;-)