Planned obsolence - the end of #rhizo14 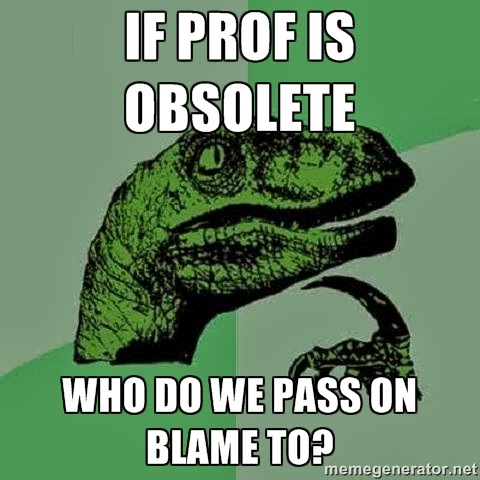 The end is nigh! The end is nigh! This is the last week of #Rhizo14. Of course, the end is probably just a beginning, but we'll cross that bridge later on.  In any case, the topic for this week is Planned Obsolescence, or as I would frame it: the culminating step of the metamorphosis of our learners from guided to self-guided life-long learners.

Dave asks How do we teach ourselves into uselessness?  While this is probably meant to be provocative, I don't think that we can ever teach ourselves into uselessness, both from a teacher perspective and a learner perspective.  From a teacher perspective, it is quite possible (and I would say desirable), to teach our students to be on their own, and to continue to learn on their own, and pass on that knowledge and gusto for learning to others.  Just because we've enabled others, doesn't mean that we are useless or obsolete.  It just means that we've added to the world.  This isn't a zero-sum game.  Yes, it probably means that we've finished off the planned portion of the course, but as rhizomes go, I (and an instructor) can continue on to what interests me in my own learning, and my former students can explore things in depth that really resonated with them.  Thus, possibilities exist in the future for cross pollination.  I can help them with what I have learned, and they can help me with areas that they went more in depth.  As one of my former professors told me when I was close to graduation, he no longer saw me as a student, but rather as a colleague.   This was quite powerful!

From a teacher-as-learner perspective, the question of How do we teach ourselves into uselessness? could also be interpreted as how do we learn so much that we become useless.  I think this is also an equally silly question.  This goes back to Week 2 or 3 when I posted on the Facebook  about engaging in a society where the concept of overeducated exists.  I think overeducation is a concept used by bosses and businesses who don't wish to see their employees grow because the underlying fear is that you will stick with the job until you get another, better, job.  This, of course, is a false equation.  People may have more skills and education than they need for a specific job, but that doesn't mean that people will get up and leave a job if everything else is fine with it.  That said, it is quite possible to be quite educated, but never put that education to work (at least for day-job type gigs). That doesn't mean you're useless, it means you've got interests that you liked to explore.

Dave goes on to ask about How do we empower people so they have the PERMISSION to learn without us?  At the end of the day, as far as I am concerned, you can lead a horse to water, but you can't make it drink.  We can give permission, empower, enable, and authorize learners to learn without a leading course figure, but I think that there is something that needs to go off in the learner.  A switch that flips or a light-bulb that turns on.  They need want to take the initiative to learn on their own.  They need to have the energy to question their own assumptions.  And, they need to have the guts to stand up for what they are claiming to be true, and have the self-awareness to know when it's time to go back to the drawing board when things seem to not be going the way they thought they would go. After all, when the professor is obsolete, you can't point the blaming finger on him ;-)

As a side note, I was meaning to write a summative post for week 5, because I did read a lot of good stuff that made my own mental gears turn, but rhizo14 has been the opposite of crystallization.  I came to the table with somewhat crystallized ideas and was interested in exploring them with others, and as the course has gone through, the crystalline entity has become more of a gelatinous thing, which now seems more like primordial learning and knowledge ooze, where new potential is possible again ;).  There were quite a few things last week I felt I needed to respond to, but they were phrased so well, that I didn't think I could add to it, in the long blog sense.