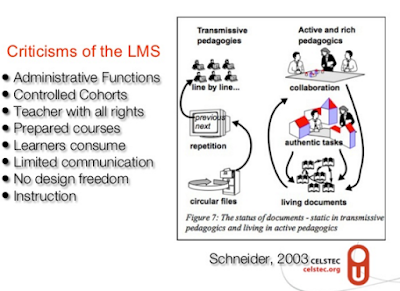 Moving right along with #NRC01PL - this is a (hopefully) short post on Personal Learning Environments, which was the topic of week 4 of NRC01PL.  Maybe this week I can actually catch up to this week's discussion (although twitter has been surprisingly quiet in this cMOOC). In any case, I love discussing PLEs because in order to meaningfully discuss PLEs we need to discuss the context in which education is happening, and those pre-requisite learner skills and behaviors that I wrote about a little bit in my previous post.

So, what are PLEs?  PLEs were defined this week as learning environments where leaders can integrate distributed information, resources, and contacts; and reflect about learning progress and learning products based on standards and interfaces (Schaffert/Kalz, 2010).

It's interesting to consider this definition because what we see (well, at least what I see) is a modularization of the learning environment.  As a matter of fact Stephen mentions a proposition (or stipulation?) by Feldstein where he indicated that we need a system to be able to slot in new pieces as they become available, not as an afterthought or add-on but as a fundamental characteristic of the system. I think that this sentiment really fits into the PLE realm because how we learn and what we choose to display as tokens of learning can vary a lot, and they can vary with the frequency at which technologies become available or non-available.

If you take, for instance, the use case of one learner (me), the PLE is a system of components held loosely together by the interconnections of those components.  While I do have those components on my domain (club-admiralty.com) that is not the main point of ingress for people who follow me.  People might see this blog post, my about.me, my twitter posts, my google+, my slideShare, my Scribd documents, storify, and so on.  Some of these services will most likely be defunct in about 10 years time (some maybe less), but I can pull out those services and put in others as my PLE grows and as it gets pruned.

The one thing I don't necessarily agree with is that the PLE is positioned as a rival to the LMS. We see a screenshot from this week's presentation at NRC01PL indicating some criticism of the LMS, which I assume is meant to be juxtaposed against the PLE.  While I do think that some things are generally negative (like teaching having all the rights), I do think that there is a lot of gray area in the criticisms above.  Prepared courses are not generally a bad thing.  What is bad is inflexibility.  Instruction isn't necessarily a bad thing; but being overbearing robotic are.  Learners consuming isn't necessarily a bad thing; but learners mindlessly consuming and regurgitating is.  What is important for me here is context.  What is the context in which these things are happening, and are they happening at the right time, for the right reasons? As Helene said (in the first video, when doing a recap on cMOOC research) some students need that structure, so having structure and something designed isn't a bad thing.

In the past I think we've positioned PLEs and LMS at opposite ends of the spectrum. And, we couldn't have them crossing paths because they were incompatible.  However, I do think that an LMS and a PLE can be used concurrently, and effectively, within a class environment. The matter at hand is more a matter of design and implementation rather than pitting one technology against another, or (perhaps worse) pitting ideologies (open vs. proprietary) against one another.

One last comment on identity on the web. It's interesting to consider identity, or rather  - identities.  I have several of them online.  Some are visible in this web of professional and personal learning that I am connecting through my blog, my school portfolios (see a recent example), my (public) twitter activity and so on. But there are also identities elsewhere. On my website I've categorized them as Academic, Professional, and Personal - broad categories.  I think your PLE probably focuses mostly on the academic side, but overlaps with the professional as well.  However, the personal side of things can be totally separate from the PLE.  Does what I watch on TV shape my PLE?  How about what games I play and what achievements I've earned? It's interesting to think about what our diverse identities are, and how those intersect and influence each other - or not!

As a side note, some notes on cMOOCs:

I found it interesting that the Daily Newsletter is something that comes up in research as important to learners (according to Helene)...well, not so surprising since I find it one of the most useful things in cMOOCs offered by Downes & Co.  Since I haven't been able to find it for this MOOC, I've decided to focus on the twitter feed. Let's see how that works out ;-)

Connectivity can be an issue amongst learners - something to keep in mind with any course design. Transcript versions of talks would be useful to people with connectivity issues that can't do streaming of media.  Stephen said that it costs around $150 per hour for transcription + proofreading time after. Interesting thing to consider the costs for free courses.

One of the motivations for people to come to a MOOC: the facilitator or guest speaker.  The human is still pretty important! The content isn't king, as the old saying goes ;-) This reminds me of #humanMOOC, and humanizing online education, and some of the mis-steps (as I would characterize them) with xMOOCs.  in xMOOCs content is prioritized over interaction - over that human element.  Interaction is seen as forum posts, but this doesn't work well with MOOCs (x or c, it doesn't matter). One of the draws for a course is still that human element. Even if you miss a live session, it's recorded and we still treat it as fresh, as ephemera rather than canned and packaged a lot time ago, for consumption in some time in the future.

Finally, I found Helene's reframing of Lurking as purposeful passive learning (PPL) interesting.  Definitely something to explore further on.