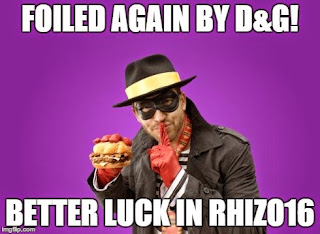 Well, it's week 6, the last week of #rhizo15 that Dave will host. The topic of this week brings us back to the original topic of this rMOOC: A practical guide for Rhizomatic Learning. It's hard to really come up with something that encompasses the meaning and approaches  to rhizomatic learning  - heck, I am only now starting to "understand" it and I've only been really thinking about it for 18 months.  Sure that was that brief exposure in Change11, but that almost doesn't exist in my mind.

I started off thinking that in #rhizo15 I would finally be able to read an engage with Deleuze & Guattari and their book a thousand plateaus, but that didn't quite happen. I was deep in the thick of it with my second doctoral course (end of first year, yay!) when the #rhizo15 started, then I was working on a #rhizo14-related project with fellow "classmates" from #rhizo14 on Actor-Network Theory, so I ended up starting to read Latour, and now we're at the end of of #rhizo15, so no D&G this year.  Oh well. Foiled Again! ;-) I do wonder who engaged with D&G in #rhizoDG this year - maybe Aras knows!

So, what would I tell someone about teaching rhizomatically?  I would say that first you'd start with a topic and let your learners explore the topic.  Engage in it but don't be preachy.  Also, design your course so that there are a few weeks left at the end where the "lunatics" can run the asylum, sort of like how we did in #rhizo14.  I think that two of the bigger hurdles in implementing rhizomatic learning in higher education are the following:

In the end, no matter what the intention of the designer and the course instructor (Dave in this case), the rhizome will find its own way! It seems that the thing to train both learners and instructors is how to deal with uncertainty.
Apostolos K. ("AK")
See Older Posts...