Hey!  It's week 2 in NRC01PL!  Well... no, it's not, it's probably like week 5 or something, but I am working at catching up ;-)  The second week of this MOOC (which I've only now joined the Google Group) is on the Content/practice dichotomy. It's interesting because this comes up quite a few times in discussions in academia. The pendulum seems to swing from extreme to extreme.  Too much practice (which I gather is perfectly fine with Stephen D), or too much theory and content.

The videos that Stephen had for this week were pretty interesting.   It was interesting to get a little backend view of OpenEdx (considering that I have no interest in setting up my own LMS). From the demonstration of OpenEdx I think that it's nice that OpenEdx has the ability to break a course into sections...but as Stephen demonstrated this functionality I found myself questioning the rationale behind this. Sections are tools  we use in traditional classes in academia to manage how many students are enrolled in a specific class. This is meant to keep the workload of the instructor at a manageable size. However, with an LMS like OpenEdx, the ability to break a course into sections seems like a vestigial organ from older LMSs and not something that is built for "massive" scale. I get that the software developers probably tried to throw that in just in case someone asked for it, but I'd personally throw it under a "legacy" settings so as to not encourage its use ;-)

In the other video Stephen seemed to be reading from a script.  In addition to brain a nice trip down memory lane (Netscape Netcenter, technorati, and so on), I picked up some things that Stephen said, and I wanted to respond to them, and add in my own thoughts. As a sidenote, I didn't realize that RSS was something that Netscape designed for its netcenter.  I am happy it survived the demise of netcenter, however it's alarming that websites are not feed-less... (argh). Please treat the following quotes more as paraphrases (I was jotting down notes as I was listening)

I agree! I would say that grading is probably the least interesting part of learning in general, whether you learn online or not.  The one thing I've observed in my (few) years of teaching is that learners (those in my own circles at least) have been indoctrinated (or apprenticed into) a society where grading is seen a way of measuring your self-worth  In cases like these "lower" grades are seen as bad and students will try to get some sort of accommodation in order to get a better grade. My classes are for the most part based on Mastery Learning, where students can earn an "A" if they submit enough drafts and show improvement, but there comes a point where as a reviewer and commenter you also get tired of reading variations on the paper you are "grading".

Personal learning sort of like eating at a buffet

I like this analogy that Stephen used. I actually see it with my dad.  He has different interests at different phases, and he is free to explore those. Whenever someone traveled to Greece they always brought back books for him to read on topics he was interested in (he prefer to read in Greece). I think where we run into problems is that our schools are systems where personal learning throws a wrench in the system. We have majors, and minors, and tracks, and honors, and required courses, and optional courses.  Our system isn't built to accommodate such free range learning. I am not saying that personal learning cannot be done. I, at least, am one data point that it is proof that it can be done. But I am wondering how this could work at a larger, systemic, scale.

Share readings with the community - pick and choose as a learner what stuff to read and react to.

I like this idea.  I would love to implement it in my courses. And, to some extent I have done the junior version of this where I provide at least some materials that students can choose from, but the topics are pre-defined.  There is a canyon here that is potentially preventing students to be free range learners in this type of community environment.  In a classroom setting you have some regular constraints such as: weeks in a semester, how many hours of effort you're expecting learners to spend each week for x-many credits (accreditation related), and how programs and curricula fit together.  If you could get over that hurdle (and I am convinced you can - but it's not easy), the question becomes one of pre-existing skills. Do learners have the necessary skills to be able to learn in such a free range environment? Or will they find it very difficult because they have not been prepared to be lifelong learners?  How do they deal with potential feelings of intimidation when they are in a learning environment that has learners that are traveling the environment at different speeds?

I agree, and we can see this on initiatives like OCW.  What I am wondering is this: is this old way necessarily a bad thing? I think sharing an entire course, such as a MOOC, is another way of sharing, but it's also potentially confining in that you are taking someone else's design for the course.  I have enough trouble sometimes with modifying OER for use in my own courses because their objectives don't necessarily match my own very well, imagine trying to do this with an entire course. 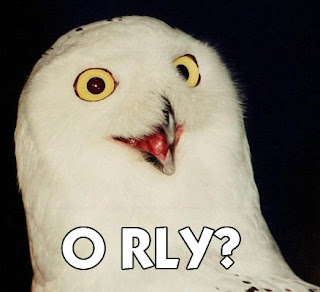 This was more of an "ORLY?" moment.  I've heard some criticisms of instructional design over the years, and I like discussing those with people.  I wouldn't consider myself a dyed in the wool stalwart defender of instructional design, but when ID vs LD comes up I try to be a devil's advocate. That said, I don't think I've come across anyone who is willing to throw the entire thing out the window.  I think Stephen needs to better explain what he means when he says that LD doesn't take advantage of an online environment.  In what way?

Order emerges out of networks

I think that this can be true.  However, I think that people need to be able to operate within a network in order for order to emerge.  Order does not emerge magically and without external intervention.  Order is caused by people (or Actors if we go with ANT) operating in a certain ways.  If the actors don't know how to act, then order does not necessarily emerge.  The question, for me, then becomes - how do people learn how to act?  And, how can we catalyze this?  After all, some things are like reinventing the wheel.  Do we want to wait for everyone to re-discover something? Or do we teach them?

I like it, and I don't disagree.  I am only wondering (pondering) what the ramifications are for people who are learning by game and experience?  Can that mode of learning be compatible with the current structures of education that we have in place? With all of the limitations and constraints that we've listed above?

Learning isn't something that leaners go to, or that they do, it's simply there, in the space

I couldn't agree more. One thing that amazes me is that people think of learning as something that is happening only within the four walls of the school. Anything that happens outside of those four walls is not considered learning, even though it really is. That said, I do think that learning is something that learners do.  And, I say this, as a way of distinguishing autonomic responses from voluntary responses.  I think (know, as a matter of fact - from my own "book learning") - that people's bodies can learn to react to things, and we tend to stay away (or be attracted to) from whatever made us react in a certain way. That is a type of learning. But the learning we are speaking of here is something that is voluntary. That people do with an open mind, and that they seek out.  In this sense, I think that learning is very much something that learners do because it's not voluntary - it's something they engage in willingly.

We can't manage learning. We are stewards of learning

I wonder what some of my behavioral intervention friends and colleagues might think of this.  In a sense I agree, we are stewards of learning.  We've been placed in that role by our institutions, by our peers, and by others. Others recognize our stewardship.  that said, I do believe that learning can be managed.  Perhaps managing learning isn't the most effective way of going about to teach (especially in particular settings) but  it is an option, and, I would argue, it's an option that should be considered depending on your specific circumstances.  At my stage of learning, I don't do well with people managing my learning.  I tried to audit/sit-in a 200-level French course (to improve my academic writing in French) - I never went back after 2 sessions because it was not geared toward me as a learner.  Clearly in that sense managing my learning experience didn't work.  But I can conceive  of instances in other learning experiences where it could work for the learners who were there.