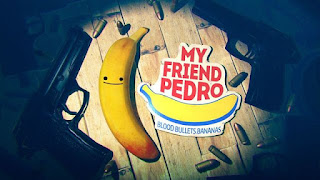 Hey!  I finished my first Game Pass game!  yay!  And, it's already paid off given that I got GamePass for a year for $1 with that lifehack back in September ;-)

Anyway, this game as a  platforming shooter, which apparently is based on a Flash game. The graphics in this version are far superior to the flash-based game, and so are the controls.  You wake up as the protagonist (no name) with a talking banana as your imaginary friend.  The banana (Pedro) tells you that people are out to get you, and you'd better get them before they get you!  I don't know if this were real life I'd seek professional help, but since it's a game...I just did what the banana said. The game provides both subtle social commentary, as well as pokes fun at society broadly. But, you can miss all that if you're just doing the gunplay.

I like the explanation of what might be the case with this oddball story that's presented in this video:


Overall this was a fun game.  The Matrix-style bullet-time, the destructible environments, and the oddball story made for enjoyable interactions in gameplay. Even the story's WTF moments kept you on the edge of your seat.

A lot of the achievements are the "flip x-many tables" or "dodge so many bullets" variety.  I am sure I could mechanically do this and earn some more points, but that doesn't seem like a good way to spend time.  Maybe when there are no other games in gamepass to play ;-)