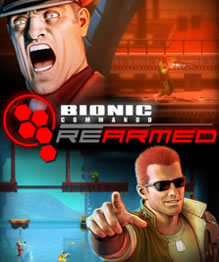 
The plot from Wikipedia:
Rearmed centers around two warring factions: the Federation and the Empire. It begins with the Imperial forces discovering classified documents regarding the development of a secret weapon known as the Albatross project, originally started by an organization known as the Badds, but never completed. Killt, Generalissimo of the Empire's forces, decides to complete the project himself. When the Federation learns of the Empire's plot, they send in their national hero, Super Joe to infiltrate the Empire. During his mission, Joe is captured by Imperial forces. The Federation sends in a second operative named Nathan Spencer to rescue Super Joe and assist him in completing his mission.

Spencer traverses several areas, eliminating many Imperial leaders along his way. As he progresses, he finds new technology and travels deeper behind enemy lines. The plot culminates as Super Joe is rescued from the bionic Imperial soldier Gottfried Groeder, and both Spencer and Joe set out to destroy the Albatross project. During the mission, Spencer encounters "The Leader", the resurrected head of the Imperial forces. Spencer defeats The Leader, and together with Super Joe destroys the Albatross. The game ends with both heroes hanging onto a helicopter, flying off as the Albatross explodes.
--------------------

This game feels a lot like the NES game Bionic Commando in terms of the game play.  It's basically a platformer where the hero (Spencer) traverses various stages via an over-world-style interface to take out the bad-guys.  If you've ever played the original on the NES you will recognize this game.  There isn't much to say about this game other than it was fun, and quick to complete (or at least it felt quick, compared to other games that I've played).  As you can see I didn't get a ton of  achievements on it because I just blasted right through it.  I do think that this game has a ton of replayability as part of its value proposition, sort of like all of the older style games like Super Mario and the original Bionic Commander.  For this reason the game gets an 8/10 for me.  Watch the walkthrough at the end of the blogpost if you are unfamiliar with original :-)