Unfortunately this year the Microsoft Xbox team didn't do a year-in-review graphic for their plays 😢. It would have also been an opportunity to do a decade-in-review, but oh well.  Missed opportunity.  I guess they are working hard on the next Xbox, which is slated to be released December 2020.

I connected my Microsoft account with True Achievements to get a sense of what was played last year on my Xbox.  It's no surprise that Assassin's Creed is my top game.  I was surprised that Bionic Commando was the next big game on my list considering I didn't go out of my way to get those achievements.  It's also no surprise that the months I am most active are months when the semester ends, or is not in session.  The one thing that is missing from TrueAchivements is a metric for time played.  You could have played very little and earned a lot of achievements, or played a lot, and earned very little.  I don't like the badge metric as being the only one that matters. 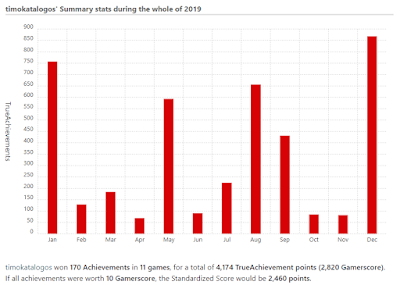 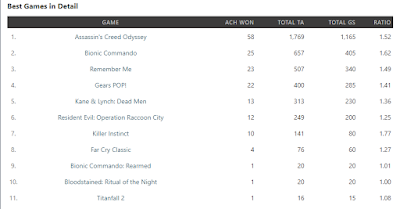