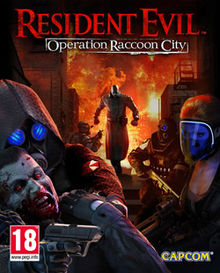 Another one of my quick-runs through xbox 360 games to get a sense of the story and the game.  This one is Capcom's Operation Racoon City, which is a game that falls into the Resident Evil franchise.

I think this game did multiplayer co-op much better than Crackdown 2. I played the campaign part of this game back in January of this year. From what I can see you can only play this game online (maybe I am wrong), and it's a game that I really wish had backwards compatibility because it's rather fun!

OK, the story.  You play as a member of the Umbrella Security Services (USS) Spec Ops team, employed by the Umbrella corporation, and whose mission is to assist Alpha team in stopping Dr. William Birkin from handing over his T-virus research to the U.S. military and retrieve the G-virus. In the end there is an inevitable betrayal and you have a choice to make. (at least that's what I remember). I do believe that this game takes place sometime in the Resident Evil 2 timeframe, but I've only played the original, and I didn't manage to get too far with it.  I am not a fan of survival horror: if I am to survive the zombie apocalypse in a video game I want a lot of health supplies and a lot of firepower...

As far as gameplay goes, in this game you pick your persona, one of the members of the USS team, and if there are others interested they can join your game.  Unlike Crackdown no player is allowed to treat others like ragdolls, and as a matter of fact quite a few players healed my injuries!  The community seemed nice, the story was fun, and the gameplay experience felt enjoayble.  This game I'd go back to, and I give it a 10/10.