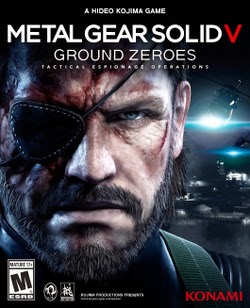 A few weeks back I was debating what game to start next, games being the interactive equivalent of that TV show that you love to follow along with.  I thought that it would be a good idea to get into Metal Gear Solid V: Ground Zeroes which I got for a cheap price last Christmas on xbox live (I think it was $7).  I was simultaneously excited that Kiefer Sutherland (of 24 fame) would be voicing snake, and not excited because the previous voice actor for me was snake.  After the initial getting used to Jack Bauer as Snake period the game progressed without me even thinking about the change in voice actor.

The game takes place after MGS: Peacewalker, and with that storyline fresh in my mind, it made sense to play this game.  OK. So the game starts at Guantanamo Bay - you're off to save the two kids from Peacewalker, and you're told to not to kill the soldiers on the base because they are our guys.  I had forgotten about this fact because I started the game in December, saved it just as I had begun the game, and completely forgot about the do-not-kill directive.  Thankfully the game didn't fail once I started taking them out.  After the game was over (and I was penalized for the deaths in terms of points), I was thinking that one thing that Snake needs in his arsenal are zip-ties.  You can knock people out, tie them up, and leave them in some dark corner safe and alive.  If you knock them out they come about eventually and they are back in action.

Anyway, after being spotted at some point in the game I ended up going all berserker on  the remaining station personnel and completed the mission.  There was an interesting cinematic sequence where they take the kids back to the base from Peacewalker which is now under attack.  Some sick individual also saw it fit to place bombs inside one of the kids which made for a gruesome and totally needless death.  I suspect that Kojima is trying to stir emotions in his audience.  Anyway, I am looking forward to having the cinematic end so I can get into battle and.... ROLL CREDITS.  Wait...what??? credits???  Are you kidding me?  Yep...the game was only one stage!  #facepalm.  I am glad I didn't buy this at full retain because I would have been one pissed off consumer.  Granted the visuals are great, the one map of gitmo is great, the game feels immersive...but come on!  I've gotten used actually requiring many hours to complete.  This was more like a tease rather than a full-on game.

A little detective work after the fact shows that creators are touting its re-playability, but for someone like me, who is more interested in story rather than all the hidden gems that you can discover on your second, third, or fourth run through, the re-playablity isn't that great.  Maybe once I get through other games I'll come back to it :p