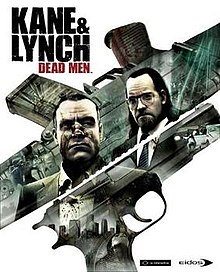 Wow!  I can't believe that I made it to the end of my non-backward compatible reviews on the 360!  And, my 360 is now safely wrapped up, protected from dust and water.  This mini review is for Kane Lynch: Dead Men on the xbox 360. This game was completed in March 2019 (so I hope I remember much of it)


The plot from Wikipedia:
The game opens with a voiceover of ex-mercenary Adam 'Kane' Marcus, reading a letter addressed to his daughter Jenny. Kane is traveling to death row after being convicted of manslaughter. Another death row inmate, James Seth Lynch, lets on there will be a breakout. Their truck is involved in a head-on collision by a group of mercenaries. The two are taken to a construction site, where they are confronted by four members of a gang of criminals called The 7, led by The Brothers and their henchmen Carlos (a close friend of Kane) and Mute. They accuse Kane of stealing money from them, and reveal that they have taken his wife and daughter hostage. Kane is given three weeks to retrieve the money or his wife and daughter will be killed.

After the meeting with The 7, they are dropped off at an abandoned mall, where they are given supplies and a vehicle and Kane goes over tactics with Lynch. However, police officers arrive and the two are forced to shoot their way out to escape. Later, Kane explains that he did not steal from The 7, but knows who did, and where they hid it. Kane and Lynch rob a local bank where the money is being kept. Only half of the money is inside the bank's safe, but Kane believes he knows where the other half is. Meanwhile, Lynch, who is revealed to suffer from mental illness and periodic episodes of violent psychosis, blacks out and kills all of the hostages after his medication wears off, forcing Kane and Lynch to shoot their way out and flee in a van driven by their getaway driver. Losing the police in the subway after the van crashes, Kane informs Lynch that they need to go to Tokyo to retrieve the other half of the money.

In Tokyo, the pair go after Retomoto, a Japanese crime lord, by kidnapping his daughter Yoko as ransom. While Kane is negotiating with Retomoto over the phone, Lynch accidentally shoots and kills Yoko while trying to stop her from escaping. Kane, Lynch and The 7's hired guns then proceed to escape from Retomoto's hitmen. Kane is furious with Lynch, but he soon realizes that they are out of time, and must return to The 7 with only half of the stolen money.

Lynch reveals to Kane that he made a deal with The 7 to betray Kane in order to ensure his survival as well as a position within The 7, but he is also betrayed and knocked unconscious at the construction site where Kane and his family are to be executed. The leaders of The 7 deny Kane's plea for additional time, after which The Brothers and Carlos depart for Havana, leaving Mute to carry out the executions. After being brought to the construction site along with her daughter, Kane's wife expresses her disgust with Kane but is executed by Mute before he has a chance to answer her, even though the 7 promised to let Kane speak with his wife. Regaining consciousness, Lynch attacks his kidnappers while an enraged Kane beats Mute to death. Kane and Lynch then protect Kane's daughter Jenny from The 7's reinforcements as she cries over her mother's body.

Kane buries his wife and decides to finish off The 7 for the sake of his daughter's safety. Kane and Lynch free a group of "Dead Men" from prison: Rific, Thapa, and Shelly. These men had been wronged by The 7 and join the duo to get revenge, although Shelly expresses resentment at working with Lynch, who he recognizes; he also then reveals that Lynch may have killed his own wife. Before flying to Havana, they return to Tokyo and kill Retomoto, reclaiming the briefcase of money to finance their war with The 7. In Havana, Kane keeps everyone motivated with promises of payment as they track down The Brothers and Carlos. Kane informs Lynch that The 7 profit from assisting factions in civil wars, with Havana supposedly the last job needed for their retirement. They find themselves caught up in an ongoing civil war, joining the Cuban Revolutionary Armed Forces and battling The 7's forces that are attempting to stage a coup d'état. They find Carlos, abandoned by The Brothers. Kane recruits Carlos, and Thapa, no longer trusting Kane, abandons the mission as a result.

The Dead Men then fight their way through the Venezuelan jungle, and locate The Brothers at their compound. Shelly demands the payment that Kane claimed Shelly, Rific and Thapa would get for helping him. Carlos tells Shelly and Rific that there is plenty of heroin in the village that they can take as a compensation. Carlos then volunteers to go on ahead and open the gates with an explosive, but vanishes once inside. This makes Lynch think that Carlos tricked them all into a trap. However, Kane and Lynch discover over Carlos's radio that The 7 have captured Jenny again. They discover in the compound courtyard Jenny unharmed and Carlos's corpse. They suddenly get ambushed by The Brothers and their mercenaries. Kane shoots a land mine beside Carlos' corpse and the two then kill The Elder Brother. The Younger Brother, however, manages to escape with Jenny and attempts to take off in an airplane.

Kane and Lynch follow in a car and disable the plane's engines before killing the Younger Brother. Jenny then pulls a gun on Kane and blames him for her mother's death. Kane tells her that whether she hates him or not, he will get her to safety. Kane is then given the choice of rescuing Rific and Shelly from the village church, where they are pinned down by The 7's mercenaries or escaping in a helicopter with Jenny and leaving them to die.

If Kane boards the helicopter with Jenny and leaves Rific and Shelly to die, Jenny will resent her father for leaving his men and tell him that she hates him. As they are escaping in the helicopter, Lynch, on the ground, says to himself, "I fucking knew it, from the first second I fucking knew it."

In the other ending chapter, Kane chooses to rescue Rific and Shelly, who are trapped in a burning church towering over a village. Kane and Lynch are too late to save Rific, but Shelly is still alive. He feels betrayed despite the rescue attempt. As they escape to the pier, Jenny is shot, and Kane carries her body along. Shelly loses his patience and attempts to escape on one of the boats alone but appears to be killed by an explosion, although his boat is seen leaving the pier. Lynch is shot as he escapes on an undamaged boat with Kane, while Jenny's status is still unknown. The boat drifts slowly with the river, while Kane holds Jenny and whispers to her about the letter he tried to send her.
----------

The plot of this game was fine. I felt like I played this game in order to "get through" it at times.  It wasn't a hard game, but it definitely seemed to lack the refinement of subsequent games.  The graphics were fine, but it felt like xbox 360 graphics put on top of original xbox game play, which basically meant a lot of shooting your way out of things.  There were some locations that were really interesting to play in, like the night club and Havana, Cuba, and there were others that were forgettable (like the abandoned mall).  Overall in this game there was A LOT of duck, hide, cover, shoot, repeat.  Havana (despite the location) felt a lot like that (and I died a lot).  The location took the sting out of repeated playthroughs of the same darned area I played tens of times before.  The most annoying of these "I keep dying" stages was the construction site with the dump truck...I almost rage quit the game at that point.

Overall I'd give this game a 6/10 (maybe 7/10 if I am generous).  I am tempted to give it a 6 because Lynch was shot (and presumably killed).  You can't do this to your buddy that's been with you throughout the game!