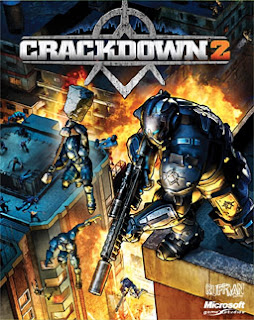 Back in December of 2018, another game that I tried to play through on my 360 before I packed it away was Crackdown 2 (funny thing is that after I completed it it became backward compatible...)  So here is a brief review of Crackdown 2 on the xbox 360:

As you can see from my gamerscore, I didn't really go after all of the achievements. Part of the reason is that the achievements were (like in the first game) about collecting orbs, which really didn't do much for me.  I was playing the game mostly for the story (and for the salty commentary from the game announcer).

The story takes place 10 years after order was restored in the city, after the events of the first Crackdown. The agency was corrupt (IMO), they hired a scientist who performed illegal genetic manipulations (who was ultimately fired, and labelled a terrorist), and now a new agent (you) is called upon to clean up the city from the "freaks" (genetically mutated humans - sort of remind me of the flood in Halo) that have taken over the city.  To do this you need to clear areas of these mutants and keeping them away by activating specific beacons throughout the city.

The game is rather fun, and it does provide a mechanic to allow others to enter your own world's instance - presumably to have a nice co-op game.  I opened up my own instance - hoping that others would help me clear my world (instead of having to grind a lot).  And this worked - to an extent.  I did basically clear most of the world within a few days and not a lot of grinding for XP, but there was at least one jerk who played hacky sack with my character.  Whenever there were no enemies around this idiot would use some sort of pulsewave weapon to blast me across the map.  This didn't make for a fun experience.  I ended up stopping the game, taking a break, and coming back when the jerk wasn't around.  I also did not want to create a new private instance because I'd lose all my progress.

Overall the game was fun.  The story as it progresses gives you the party line - brave police officer falls in the line of duty - but the "real" story is told through audio recordings found throughout the game.  I did find a few, but again - hunting for hidden (optional) things is not my cup of tea.