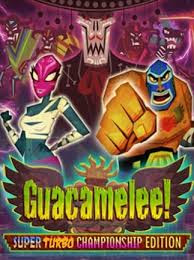 Here's to another completed game :-)  After the odyssey that was Assassin's Creed Odyssey this one felt like a light breeze!  This game was another GamePass game that I decided to try out, and I rather liked it.    I wasn't sure if I was going to like the Metroidvania-style gameplay (sometimes I love it, sometimes I absolutely hate it), but this hybrid brawler-Metroidvania game was really good.  I loved the color palette, the references to other games, the humor in the dialog.

The plot (from Wikipedia):
In a small village in Mexico, Juan Aguacate is a humble agave farmer. On the Dia de los Muertos (Day of the Dead) he’s going to meet with his childhood friend and love interest, El Presidente's Daughter, Lupita. An evil charro skeleton named Carlos Calaca attacks the village and kidnaps her. Juan is no match and is killed by Carlos. He is sent to the land of the dead, a parallel world where the dead reside. There, Juan finds a mysterious luchadora named Tostada. She gives Juan a mystical mask that transforms him into a powerful luchador and brings him back to the world of the living. The game then follows Juan's battle to rescue his beloved and to stop Calaca's plan to sacrifice her in a ritual that would unite the worlds of living and dead under his rule.

While he confronts X'tabay, the first of Calaca's lieutenants, he ends up transformed into a rooster and brought back to human form by another rooster with mysterious powers. After defeating X'tabay, she reforms, revealing that Calaca was once a great rodeo man who broke his arm just before an important competition, and sold his soul to the Devil to have it healed time enough for the competition, but just after winning, the Devil enacts his payment and drags him to hell, but with X'tabay's help he deceived the Devil by having him transformed into the same rooster who helped Juan, having helped him against Calaca in order to restore his power.

Juan gains power to confront and defeat the rest of Calaca's forces. Juan pursues Calaca to the altar where the ceremony is being held and defeats him, but does not arrive in time to save Lupita. In the normal ending, Juan returns to his village and lives his life in peace until reuniting with Lupita in the afterlife and the mask disappears. In the true ending, attained if the player clears all the hidden trials, Lupita is revived by the power of Juan's mask which breaks apart, and the two return together to the village where they get married.
--------------------

I ended up getting the unhappy ending where Juan and Lupita end up finding each other in the afterlife.  I have a few qualms about calling this the "bad" ending.  I think it was rather interesting, and it follows the fairytale-like plot. 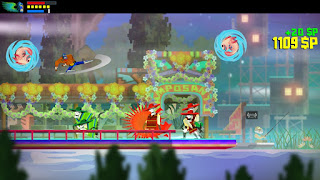 I ended up playing some of the Infierno challenges, but I don't think I'll be going back (anytime soon) to complete the challenges.  There are 6 more orbs to find to get the "good" ending (the "they lived happily ever after" ending), but that's time taken away from other games (and the semester begins today, so...nope)


Overall I'd give this game a 10/10.  Very entertaining, nice environmental puzzles, and if you don't spam the buttons on your controller - the story is funny too!