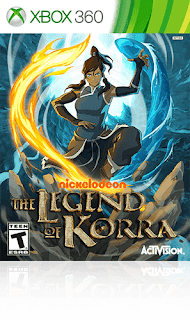 Another really quick review of an xbox 360 game that isn't backwards compatible to the xbox one that I did a quick run through in December of 2018.  This time the game is the Legend of Korra on the xbox 360 (I am surprised that it's not backward compatible!)

I know that this is based on a cartoon, which I haven't watched.  But it is a brawler so it looked like fun.  The game resorts to a regular trope: superhero gets stripped of powers that define them, and they are on a journey to get their powers back and make themselves whole again.  Korra is opposed by a "chi-blocker" who, at the start of the game, strips Korra of her bending abilities, which she has to regain in the course of the game. The game's main villain, Hundun, is named after a chaotic entity in Chinese mythology. An ancient, evil being previously trapped in the spirit world, he was released into the physical world by Korra's opening of the spirit portals at the end of the second season. The game sees him sow chaos in the world and pursue his grudge against the Avatar.

Overall the game was quite fun.  I'd play this again on a more difficult level setting, but I don't think I'll be pulling out my 360 from storage any time soon for it.  I really wish it would come to backward compatibility once "scarlet" hits the store shelves.  Overall score: 9/10