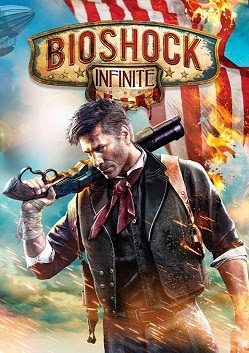 A couple of weekends ago I finished Bioshock Infinite (woot!).  I had begun the game a little before I went off on summer vacation (so there was a big lag between when I started and when I finished), but it wasn't all that difficult to get back back in the groove once I got back from Greece. I have to say that the original Bioshock games left me with a sense of wonder whereas  this game's story left me with a good sense of WTF?! (of course there will be spoilers if you choose to continue to read).

So, the story starts off with a Pinkerton agent called Booker Dewitt. The guy seems to have debts (I assumed gambling debts) and this seems like a good start to the game: go on a mission, get a big payday, pay off debts, and live happily ever after (if he didn't have the mental scars that he seems to have anyway). His mission is to head off to Columbia, a city in sky, and free (or abduct) some girl that's held hostage by some crazy religious fundamentalist.  OK, sounds noble.  The fact that you can stick it to a bunch or racists is also another bonus in the game ;-)

The mechanics of the game are pretty familiar if you have played the previous two Bioshock games.  You get ammunition of various kinds, along with firearms to go with it, you scavenge the hell out of the place because that's the only way you survive, and you have "vigors" which give you super powers.  The game is actually quite enjoyable, and it is quite short (once you reach your stride and get immersed) so it wasn't a tough or boring game (I won't try 1999 mode since I did die a lot in the normal mode ;-) ).

Anyway, once you find the girl and you try to save her, you realize that she can open rifts into other dimensions, and heck even time!  It's as if someone mashed up an episode of Sliders with some series on Time Travel.  I really liked the concept, but things like the grandfather paradox are quite big to get your mind around them.  So, in the end, right before the big reveal, I was speaking to my xbox (even though it didn't respond back) and I said "Booker IS Comstock!" and BAM, it was revealed that Booker and Comstock (the bad guy in the game) are one and the same, and in order to prevent all this from happening Booker needed to kill himself so that he didn't become Comstock down the road, and the kicker was that he was killed off by the multiple versions of the girl who he went to save, who turns out to be his daughter that he gave to Comstock years ago.  Seriously, WTF!

I really loved that for the last part of the game I am walking around Rapture, which is the setting for the first two Bioshock games. Even though I almost never buy DLC, I am tempted to buy the expansion to see the connection between Infinite and the other two games.

When all is said and done, I earned 27 our of 80 achievements (which seems to include the DLC achievements) meaning that I got 34% of the points.  Not bad for a game that I went through as quickly as I could ;-)
Ο Φοβερός
See Older Posts...