Stargate Origins | It was fine 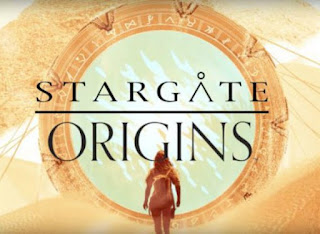 I wanted to indulge my inner critic and say "it stinks!" but it wasn't all that bad. It has been eight years since the last time any Stargate show was on television, so it's been a while. Longer, in fact, than between Enterprise going off the air and the first Kelvin-timeline Star Trek film! So, if there are Stargate fans out there, I hope they enjoyed it, and that there are more Stargateverse stories to be told soon. This story is basically a short web-series (10 episodes of about to minutes each) that I think will be stitched together for a full length release.  I think that MGM was basically stringing along the fans for a few weeks while they worked up the buzz for something.

[Spoilers] The story takes place in part in Ancient Egypt and in part on some unnamed planet before the 1994 Stargate movie that kicked off the series. The story follow Katherine Langford whose father discovered the stagate in Giza. Basically a Nazi occultist comes along, who somehow has a gate address, they dial it, and try to make a deal with a Goa'uld that's been out of power for a while (and connected to Ra). There is a harsecis involved (which we know is a no-no), and once the story concludes the Nazis are dead, Katherine and her father (played by Connor Trineer!) are back with their memories wiped by the Goa'uld (who is now dead) and the imperative to bring more people back at some point in the future. Katherine remembers, however, that the amulet of Ra, which she had bought from a street vendor before her adventures, brought her "luck", so in the movie this is what she gives to Jackson.

All things considered this was a pretty fun prequel.  I don't get the criticism I've seen on the web about this being campy and not serious...have you seen Jack O'Neill (on SG-1)? For crying out loud ;-)
Ο Φοβερός
See Older Posts...