Well...I guess it's adieu to Defiance and Dominion 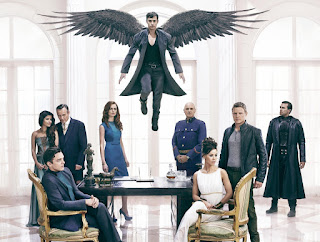 As I was browsing my RSS feeds the other day I came across a news story that reported that both Defiance and Dominion, both SyFy channel series, have been cancelled!  Come on Syfy!  First Stargate, now this? ;-) What do you need more airtime for sharnados? LOL.

So, Dominion only got two seasons. The show was based, sort of, around the notions of the movie Legion, where God has left be building, the angels are upset, and they invade the lower planes (earth) to eradicate the menace that is Man, because according to them Man is responsible for God taking his possessions and heading for the exit.  Some angels have bodies, so they can blend amongst the humans, and some do not, so they need to possess a human in order to exist in this plane. This possession marks the human body and they look deformed in a sense (pale, messy hair, pointy teeth, and so on). Some cities have survived and they have fortified themselves, forming armies to fight the angels. One angel (Michael) stands with humanity and protects the savior who will do something amazing in the future (who knows what it is now that the series has been cancelled) ;-).

What I found interesting about this series were the social dynamics between "angel society" (higher classes vs lower classes), and the human society that emerged from this Armageddon, how classes re-established themselves, and how people 'grew' into their roles, faking it until people no longer questioned it. 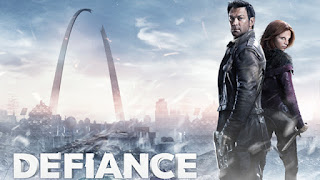 Defiance on the other hand had 3 seasons, and the season finale for season 3 was actually pretty satisfying.  It reminded me a lot of the finale to Earth: Final Conflict. Both series had 12-13 episode seasons in the summer, so I don't get why they were cancelled (it's not like it's during regular fall/spring seasons).

Defiance, as a theme, reminded me a lot of Alien Nation.  Arcs carrying a variety of sentient species made their way to earth, as the only habitable planet, after their solar system went super nova.  Well, when they scouted earth Neanderthals roamed the place so now everyone's quite surprised at who's coming to stake a claim on this planet.  Unlike Alien Nation, where the newcomers blended into Californian society, there is a lot of conflict all around.  Earth is not longer the same earth, it's be partially terraformed to support some alien life forms, earth governments have broken down, a new global earth government has been formed, and of course you have the Votan alliance made up of all the Votan races (species?).And, beyond politics, you've got the regular Joe trying to make it through another day (be that Joe human or Votan).