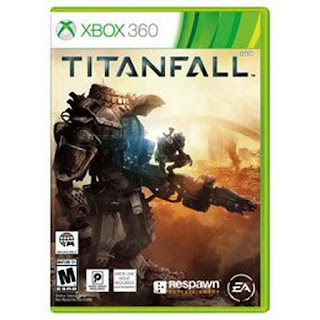 Before I put away my xbox 360 (hermetically sealed to keep the dust out while it goes on cold storage), I had an opportunity to try Titanfall. This was back in September of 2018 (yeah, this review has been in my drafts for a while).

Originally I was a bit reluctant to get this game because it can only be played online (so no single-player content) and at the time I didn't have xbox live.  Fast forward to an incredible sale (was it only $5?) and the fact that I had xbox live at the time, and it seemed like an opportunity to give this game a try.

The game takes place at a time in the future where humanity has moved to colonizing the stars.  There are two factions: the IMC (the presumed "good guys") and the Militia (the presumed "bad guys") but you aren't given a choice as to which faction to play.  You enter a match-making lobby and the system chooses for you.  So, sometimes you play as the IMC, and other times as the Militia.  This gives you a sense of what's happening form both sides of the conflict (for the entire story check out the wikipedia article).  If you play enough you get the story from both side and I guess you can make up your own mind as to who the good and the bad guys are.

The mechanics of the game are interesting.  You play as a human pilot who can run around buildings and open areas, but you can also summon giant mechs (called Titans) that you can pilot. You can change between human and titan within the same match.  When your titan is damaged you can eject, take cover, play a traditional FPS, and when your new titan is ready to drop from orbit, you can resume by piloting the mecha. You can also have the titan follow you around the map on autopilot while you're on foot.

Generally, I really dislike PvP games because I totally stink at them (I get killed within the first few minutes). However, this particular game made PvP fun. The matches are rather short, and everyone seemed to be on a fairly even footing. I really wish this game played on the xbox one because I could totally see myself playing short matches here and there.  I know there is an xbox one version of the game, but in all honesty, I don't want to pay for it again.