Another belated April Fool's joke.  The Artisanal Sonification System came back this year (I always look forward to it), and apparently this year many headliner NPCs were playing the concertina wherever you usually found them.  I did come across a download of all Artisanal Sonification System sounds, but I forgot to bookmark it...d'oh!  I would have liked to add those sounds as alert sounds on my phone ;-).  the Lore post from the site is copy/pasted after the image :-) 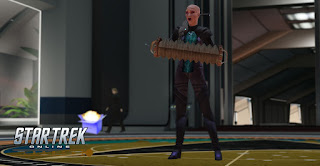 It’s a time of peace and understanding throughout the galaxy, where, thanks to the Khitomer Alliance, sharing of culture is at an all time high. Which is why it makes the most sense, right this minute, to bring a normally very small cultural festival to every corner of the galaxy! That’s right, music fans, the Klingon Concertina is going big time! We’ve sent concertinas to all of the major players in the Alliance, and they’ve been practicing for months for their big performance today. Experience the honor of traditional Klingon music wherever you go, starting at 9am PT today!

We’ve also received word that Kurland himself is back on the promenade of Deep Space Nine, and he will have a very special item, today only!
From the dev blog.
Ο Φοβερός
See Older Posts...