woah! What a season finale for continuum! 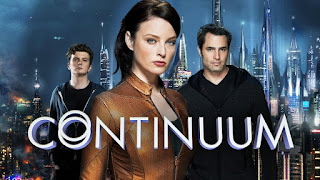 Last week I was catching up with Continuum, a Canadian science fiction show about a future cop that finds her way to present-day Vancouver.What I didn't realize is that this was the final season, and I was actually watching the final episode, which for once was refreshing to not know what was coming. (yes, spoilers ahead). Stop reading, and go see this series.  It's worth watching.

With the TV series over, I thought I would write a little bit about its plot, and what I liked about it. As I wrote above, the series starts off in a bleak future (do shows ever start off in a Utopian future?) where corporations rule the world and people are subjects of corporate entities. The police force (aka "protectors") work to (essentially) put down rebellions from the people, even though (at least some of the) cops that work for the police force are idealist and do it to actually protect the people.  The future also reminds me a bit of Fahrenheit 451 in terms of banned books and banned materials.

In any case, certain revolutionaries are about to be executed for their crimes, but they've hatched a plan to go back to the past to prevent all this from happening. One proctor, Kiera Cameron, sees this, and last minute jumps into the time stream and get thrown back into the past along with the revolutionaries who, in the present day, form a group called Liber8 (liberate).  Kiera joins the police force under the guise of being a federal agent to track down this terrorist group who has already gone to work.  In the meantime, just by accident, she meets Alec, her future boss (one of the corporate overlords), who is just not working on the technology that she brought back from the future. Her bionic suit communicates with his servers, and off they go changing the future.

Of course, as with any time travel show, when you muck with the past, things change in the future, so in subsequent seasons other future factions exist, the future gets more messed up, and people from that future wants to escape and come to this present which is rosier.  You also get some "time lord" referred to as "the traveler" who looks like a Jesus figure near the end who has (apparently been keeping tabs on things all along). This traveler figure reminded me of the Traveler in the Next Generation (star trek) a bit.

Anyway, along with stopping liberate, Kiera's goal was to get back to her family. Through this cosmic confluence she uses the time machine which goes forward in time (as well as back) built by this other faction to get back to her timeline.  When she returns she is greeted by Alec. The future is changed.  Things are much better. The government is for the people by the people, corporations don't rule the world and she is back with her family.  There is only one catch. This Kiera never became a police officer, she never went back in time to prevent "terrorists" from doing whatever they were going to do, so as a consequence while a Kiera is with her family the protagonist can only enjoy her victory from afar since there are now 2 Kieras in the future, and she is not this kid's mother (technically speaking).

This ending was amazing (definitely much better than lost!).  I give it a 9/10.  I would say that this is a series worth watching.
Ο Φοβερός
See Older Posts...