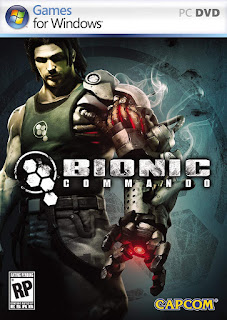 One more game from the "completed a while ago" pile that I have not written about.  This one is Bionic Commando for the xbox 360, and I completed it on 5/18/19.  This video game felt like a sequel to the NES version of the game (which I haven't played a ton).


The game is a 3D world interpretation of what the classic bionic commando game. You use your bionic arm to attack and swing around the city to meet your objectives.  While you're trying to get from point A to point B baddies (humans, robots, humans with lots of guns) come at you.  I think the most satisfying attack in this game is grabbing someone with your bionic arm and rappeling into them. It's almost like a dance.

That said, the game does get a bit tiring after a while since the combat is pretty repetitive. I do like the environmental puzzles but I dislike that you can't float.  If you fall into the sea you sink.  yes, I know the bionic arm is heavy, but you mean to tell me that you've developed such a level of technology and you can't figure out how to make a bionic man float?  The other annoying thing is that the city has pockets of radiation, which harms you, and you need to figure your way around.  This isn't a bad thing, but it does serve as a game mechanic to keep a seemingly endless world contained.

Here is the synopsis from wikipedia, if you're interested in the plot:

The events of the game take place ten years after the original game. The game follows Major Nathan "RAD" Spencer, a government operative working in the fictional Ascension City and an Operative named Joseph Gibson aka "Super Joe" (voiced by Steven Blum) for the Tactical Arms and Security Committee (T.A.S.C) that trains bionic operatives like Spencer. After he is betrayed by his own government and falsely imprisoned, the Great Bionic Purge begins. Before his execution, an experimental weapon detonates in Ascension City, unleashing an earthquake along with a radioactive shock wave that leaves the city destroyed and wiping out its populace. The terrorist force known as the "BioReign" claims responsibility, threatening invasion. Spencer is freed to redeem his name along with the T.A.S.C's and is reunited with the bionic arm of which he was stripped.

During flashbacks the player learns that two years prior Spencer and his bionic partner Lt. Jayne Magdalene failed to eliminate two rogue bionics who had allegedly murdered a handful of people. Spencer resolved to help the two bionics escape when he and his partner discovered that the FSA were actively rounding up and forcibly rehabilitating bionics; something that both Spencer and Magdalene were themselves. Soon after the two rogue bionics and a wounded Lt. Magdalene escaped, Spencer was arrested by the FSA and sentenced to be executed for his treason.

Returning to the present, Gibson releases Spencer on the condition that he assist the FSA against the threat to Ascension City. When given this ultimatum in exchange for his freedom, Spencer initially turns it down, but Gibson tells him he has knowledge of Spencer's missing wife. As Spencer progresses through Ascension City, he discovers information on Project Vulture, a super weapon being sought after by the terrorists. Spencer is ordered to retrieve the item before the Bio-Reign terrorists can. After finally gaining access to the item, he is betrayed by Joe who reveals himself as the leader of Bio-Reign. Joe has also enlisted the help of Gottfried Groeder, a character introduced in Bionic Commando Rearmed.

Joe then reveals that Spencer's wife never left, and alludes to the concept that she is actually part of Spencer's bionic arm. According to Super Joe, in order for bionics to work perfectly, they have to sync with their host on both an emotional and physical level. In this case, Spencer's wife was the perfect candidate. After this revelation, Spencer hastens his pursuit after Joe who activates Project Vulture before Spencer reaches him. Magdalene tries to stall Super Joe, now in a Bio-Mech suit, but she is killed while Spencer is forced to helplessly watch. In a fierce mid-air battle, Spencer kills Joe and ultimately stops Project Vulture. He falls back into the hole of The Vault from which he, Joe and the vultures had ascended earlier.

In the epilogue a brief conversation in Morse code is shown between the sniper (Thomas Clarke) who'd been following Spencer, and an unknown party. The first message reports that the Vault had been occupied and the Vulture Sentry System had been "disabled" before requesting further instructions. While the coded reply was not decrypted from Morse code for the audience (encrypted message is in German once decrypted), it apparently reveals the following declaration in response: "Execution of Phase Two Prepared. Activate Project Albatros [sic]."

Overall, this was a quick run for me.  I got 26/49 achievements making for  415/1000 points. I am sure there were other achievements for collecting the various collectibles throughout the game which required some fancier acrobatics than I had time for 😃. It wasn't a bad game, but I am not sure if it's worth pulling my 360 out of storage to play again.  I wish it came to backwards compatibility so it would be an option for playing on the xbox one (or future) consoles.