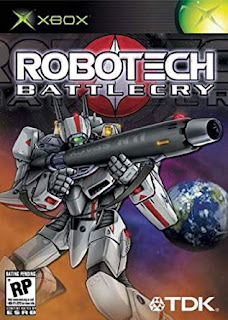 Earlier this year, before I put away my xbox 360, I decided to try out Robotech Battlecry for the original xbox - which is backward compatible with the 360, but not the one (come on Microsoft and TDK!).  I ended up trying this game but I didn't finish it.

The plot from wikipedia:

The game follows the exploits of ace pilot Jack Archer. After serving as a mercenary in the Global Civil War, flying both with and against Roy Fokker impressed him enough to recommend Jack for the RDF. The early stages of the game cover Jack's final training and his fighting during the Battle of Macross Island, Jack not being close enough to the SDF-1 when it space folds to Pluto and being left behind on Earth, rejoining his friends upon their initial return home. The majority of the game is set in the Post-Rain of Death era and involves Jack and his Wolf Squadron defending various human outposts against Malcontent Zentraedi forces led by the warlord Zeraal.

The final mission has Jack taking on Zeraal at his base, which is a crashed Zentraedi Carrier. However, the ship makes a spacefold jump with him on it, and it leads him to a distant region of space. Out of contact with the RDF, he seemingly dies from a loss of life support.
--

Overall, as a Robotech fan, I found this game enjoyable. The controls are acceptable and the plot reminds you of watching an episode of the eponymous TV show. There was one issue with the controls which really annoyed the heck out of me:  The analog sticks don't behave the way one expects them to behave in a flight-based game, which makes for some really odd controls and camera angles at times. I think that this game would really benefit from having a modern-day remake (if people are still into Robotech) with the controls updated to modern expectations, and the graphics updated.

One thing that really surprised me about this game was that there were proto-achievements included in the game!  While the awards don't get tracked through xbox, they are an interesting addition.  They get awarded for completing stages, destroying certain amounts and types of enemy fighters, and completing certain special missions.  I did earn a few of them, but I forgot to take an (actual) screenshot :-)

Overall I'd give this game an 8/10 (if the controls were better, it would certainly deserve a 9/10)