Well... I should probably say "mostly done".  There is the Jack The Ripper expansion story that I haven't played yet, but considering that it's almost a separate game, I thought I'd write about the core game (plus "the last maharaja" missions).

So, after I finished Unity I jumped right on to Syndicate (and with the xbox spring sale going on now, I actually picked up Origins...but I think I'll hold off on play that game for a little while, I think I am getting a little assasssin saturation at the moment).  The first thing that struck me with this game was the contrast with Unity. Whereas Unity had a rooftops parkour & sewers feel to it (you could almost avoid street level if you wanted to), Syndicate felt a bit like a combination of  Assassin's Creed II and Assassin's Creed III (with regard to hiring NPCs to do your bidding) and Batman Arkham Asylum (with regard to the rappelling and going from roof to roof with a zipline).

The story takes place in Victorian London (and you actually do meet the Queen, as well as other notable characters such as Arthur Conan Doyle, Marx, and Florence Nightingale) and you play as the Frye twins. Evie and Jacob have some shared assassin skills that you can build from their skill tree, but they also have their own custom skills, weapons, and clothing that you can use to customize each character. London, at the beginning of the game, is a Templar stronghold with just one lone assassin (the descendant of Abaaz from Assassin's Creed Chronicles: India).  Here is the beginning of the story on wikipedia:

In 1868, Henry Green—born Jayadeep Mir, the son of Indian Assassin, Arbaaz Mir—writes to the Assassin Brotherhood begging for aid. Green explains that the Brotherhood in London has fallen, leaving the city at the mercy of Templar Grand Master Crawford Starrick, who controls both London's industry and criminal underworld. Starrick plans to use his wealth and influence to seize control of Britain and, through its holdings, the world. Outside of London, the Frye twins begin their work, with Jacob assassinating a corrupt factory boss, Rupert Ferris. Evie infiltrates a lab owned and run by David Brewster and Templar occultist Lucy Thorne. Inside, Evie finds Brewster experimenting on a Piece of Eden and assassinates him. Brewster tells Evie that Starrick knows of a second, more powerful Piece of Eden when the first Piece of Eden becomes unstable and explodes, forcing Evie to flee. With their missions successful, the Frye twins decide to disobey orders from the Brotherhood and head for London. In the present, Rebecca and Shaun spy on a meeting between senior Templar figure Isabelle Ardant and Álvaro Gramática. Rebecca and Shaun attempt to capture Isabelle but she had anticipated the ambush, revealing that Sigma Team leader Otso Berg and Violet da Costa were there to intercept the two assassins. Nevertheless, the two manage to flee when Bishop detonates a pre-planted explosive.

The twins grow apart during the game, one being a little more reckless (jacob) and one (evie) clinging to tradition and her actions basically being guided by asking "what would father do?".  At the end they reconcile, and all is well, after they've saved the Queen and kingdom, remove the templars from London, and solved some mysteries for Marx, Doyle, and the rest of the gang. 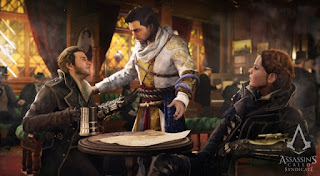 In this game, unlike Unity where you got Helix points (to buy skills) via challenges, you basically get 1 Helix point every 1000xp that you rack up.  Once you reach level 3 you can just head into a street-fighting club and basically participate in boxing matches to win money, crafting goods, and xp.  I opted to level up to level 10 (final character level) before taking out all templar neighborhood bosses, and before proceeding with most of the missions.  While this made the game a little "easy", I prefer grinding a bit so that I can just take in the story when I've reached a good enough level.  The only thing that I didn't uncover in the game were the specs for the advanced berserker poison, so that was one tool that I could' really use near the end - my low level poisons were not match for level 10 enemies. The one thing that was a disappointment was that Eagle Vision could not be used while running.  In Unity it was time constrained, but you could use it while running (hence uncovering positions of crates, helix points, etc.) but in this game, while the power is unlimited, it goes away as soon as you start running (or start galloping on a horse).

The game was a ton of fun, and I really liked that it was designed as a single player game.  While Unity was "fixed" by the time I got to it, there are still team challenges which are doable in single player (with enough time or skill), but are really meant for two players.  This game also seemed to focus a little more on the modern day story. You still don't know who the initiate is who is running these simulations, but we do get to see some modern-day action, and a surprise!  While Unity had the more profound end with Arnot's end-game narration, Syndicate ended with a "happily ever after" tone in the past, and a WTF in the present.  In the present (for wikipedia): the Assassins find out the Templars plan to use the Shroud to construct a living Precursor. The recording also shows that Juno is secretly manipulating certain employees within Abstergo from behind the scenes to sabotage the company, and has her own plans for the Shroud. Juno also contacts the Initiate through the simulation, leading them into a new memory segment of Lydia Frye, where she tracks down and kills a Sage in a war-torn London during World War I.

Whoa!  I was not expecting any of the ancients (aka precursors) to be around any longer. I wonder what happens in Origins!

Overall, I'd give this game a 9/10.  There are still things left to do in London (crates to open, helix points to collect), but I don't think I'll be coming back to this game any time soon.

Some game stats from xbox: