Along with the "artisanal" soundtrack for the game this year (something that seems to have become an annual tradition in STO), there was an announcement for a new (April Fool's) expansion of the game titled "The Gorn Discovery"

There are a lot of humorous puns here (see announcement below) , but in all seriousness this would have been an interesting expansion.  At the very least it's another starting point for people interested in KDF-aligned factions :) 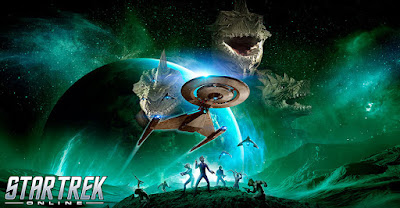 Here is the (fake) announcement:

We’ve been gorn to secrecy about this for months, but it’s finally time to announce the next step in our on-gorning Discovery expansion: Star Trek Online: Gorn of Discovery! We know you're gornna love getting all the gorntent you crave! Try our newest missions, “Here Today, Gorn Tomorrow!” and “Gorn with the Wind!” Defend the gornfields of Gornar in our featured TFO, “The Gorns of Navarrone!”

“Who Gorns for Adonias”

“Children of the Gorn”

And a fantastic new Gorn tutorial, “Where No One has Gorn Before,” plus the walking tour of Gornar, “Gorn Home,” in which you’ll meet the famous descendants of the Cestus III incident - the Osgornes.

This update also includes an updated soundtrack, produced in partnership with “Gorns N’ Roses” featuring such hits as:

“Every Rose has its Gorns”

“Gorn to be Wild”

“Never Gorn-a Give You Up”

We’ll also be including new kits for your Captains, including the following powers and weapons:

And the new emote, the Sexy Gornstar Dance.

We can't wait for you to experience this gornucopia of new content when Gorn of Discovery arrives in Star Trek Online later this Gorntember.
Ο Φοβερός
See Older Posts...