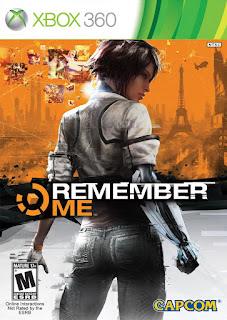 Another one of my "finish before putting the 360 away" games.  This game is Remember Me  and I finished the game on "script kiddie" (easy) back in January 2019. This game is not backward compatible to the xbox one (yet), but I think it would make a nice addition.

The plot from wikipedia:
The game begins as Nilin (Kezia Burrows), an Errorist imprisoned in the Bastille Fortress, is having almost all her memory wiped by Memorize. As she is taken to have the last of her memories wiped, a mysterious man called Edge, the leader of the Errorists and a man she only hears over her comm device, helps her escape. Edge tells her that she is an Errorist with the gift of both stealing and remixing memories. After escaping into the slums of Neo-Paris, Nilin encounters Tommy, a fellow Errorist. Nilin and Tommy are attacked by Olga Sedova, a bounty hunter chasing Nilin. Nilin dives into Olga's mind and remixes her memory to make Olga believe that her husband was killed by a Memorize doctor. She then becomes an Errorist ally, and transports Nilin to her first destination. Arriving in the Saint-Michel district, Nilin, who is aided by another Errorist codenamed Bad Request, is told by Edge to steal secret codes from Kaori Sheridan, Neo-Paris' top architect. After retrieving and uploading the codes to Edge, he uses them to open the Saint-Michel dam, flooding the district. Due to the flood draining out the slums, Nilin is able to infiltrate the Bastille and heads to the memory servers to free the stored memories of herself and the inmates while taking down Madame, the sadistic manager of the Bastille. With Madame defeated, Nilin releases the memories of the inmates and partially regains some of her own. She remembers the crime that landed her in the Bastille; on a mission, Nilin remixed the mind of a Memorize commander and made him believe he had killed his girlfriend. The altered memory pushed him to commit suicide.

Nilin reluctantly goes along with Edge's next plan: to remix the CEO of Memorize, Scylla Cartier-Wells, to make her see the harm her company's technology is causing. Nilin makes her way into Scylla's office and enters her mind, remixing the memory of a car crash which left her with a bitter taste against the world. As she changes the memory to make Scylla a more compassionate person, Nilin discovers that she is Scylla's daughter. Nilin is then told by Edge to head for the Bastille basements to save Bad Request, who has been taken captive. She finds Bad Request, but discovers that his memory has been fully wiped. It is revealed that Memorize scientist Doctor Quaid means to control the Leapers through their Sensens and thus breed a private army for Memorize. However, Johnny Greenteeth, a former co-worker of Quaid's who was experimented on and turned into a Leaper, kills Quaid and prepares to self-destruct the Bastille. Bad Request helps Nilin take down Johnny at the cost of his life and Nilin escapes the destroyed facility.

With all of Memorize's secret operations taken down, Edge presses Nilin to find the Conception Cube, Memorize's central base, and destroy H3O, the Memorize Central Server. Once there, she encounters her father, Charles Cartier-Wells, the creator of the Sensens. Upon finding him, she sees that, fuelled by the car accident that injured his wife, he has become lost in a dream of an ideal world free from painful memories, all inspired by the desire to help Nilin forget about the accident. Nilin makes him see the harm his technology causes, and Scylla arrives to convince Charles to help Nilin enter the Central Server. Once in the presence of the Central Server, it is revealed to Nilin that Edge is a self-aware entity created by the amalgamation of unwanted memories within H3O. Nilin, who unwittingly started Edge with the memories of her unhappy childhood, enters the Server and, at H3O/Edge's will, she destroys him and releases the memories back into the general population. As the memories are released, Nilin remembers Edge's words about the mind being a fortress, and says that Edge died to remind people that memories should not become open to all, and that painful memories should be lived with rather than forcibly removed. She comes to the conclusion that outside her now-restored mind she has a family again and a damaged world to heal.
----

I actually liked the story of the game a lot, and the visuals for Neo Paris and the places it takes place were pretty good.  I like that technofuturist look in video games.  Even though I find the story interesting (reminding me a bit of Johnny Mnemonic and Dollhouse), I think the game starts off with a bad trope of it's time: You're all-powerful, but something happens and you lose all your powers...and you need to get them back. I think if this were the first game I played that had that theme I'd be fine with it, but as an xbox player for the past 10 (?) years I find it all a bit tiring at this point - which is why I chose to play the game on easy and breeze through it.  I would consider playing this game again if it ever became backward compatible with the xbox one, but for the time being it's going into deep freeze, along with the 360.  I'd give this game a 7/10.