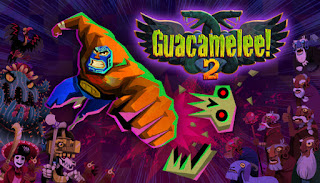 I rather enjoyed the first Guacamelle, so since Guacamelee 2 was available on GamePass, I thought - why not?

This sequel picks up the story after the first one ends, and it's not just a rehash or reskin of the first one, but rather it adds a variety of new game mechanics, such as being able to launch yourself from different areas of the wall so you can hurl over dangers on the ground or reach new heights.  You also get a new skills-tree system that you can max out by purchasing new abilities that help you along the way.  Skills can now be purchased at any time without having to wait to reach one of those save points in order to do it.  You can still only buy costumes at those save points, but skills are accessible at any time you've got money to spend.  The annoying thing, when you start, is that you have none of your previous abilities when you start the game, and you need to re-acquire those...and it takes a long time.  I get that Juan has aged and he hasn't been the luchador for a while, but come on! 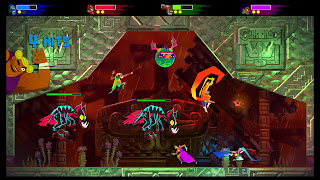 The story from Wikipedia:
The game begins with a simplified version of the first game's final confrontation with the world-rending Calaca, leading into the true ending where the luchador Juan successfully saves the life of El Presidente's Daughter, Lupita. Seven years later, the two are married and live with two children, with Juan having grown out of shape. Black clouds begin to appear in the village, followed by Juan's mentor Uay Chivo appearing to tell him the entire "Mexiverse" is in danger. He brings Juan through a portal to "The Darkest Timeline", where the source of the trouble is. In this timeline, Juan and Lupita were killed by Calaca, who was defeated by another luchador called Salvador. In the seven years since, Salvador has become corrupted by the power of his mask, and now wishes to collect three relics so he can access the Sacred Guacamole in the realm of El Otromundo and become all-powerful. However, by beginning to collect the relics, he has caused the timelines to destabilize, which will mean the end of all timelines if he is not stopped.

Juan is led to reunite with Tostada, the Guardian of the Mask, so he can be restored to fighting form. They begin to travel the world to stop Salvador and his underlings from collecting the relics, but ultimately fail, and Salvador successfully gets to the Sacred Guacamole. However, Juan eventually defeats him, which destroys Salvador's mask and results in his death. The timelines are restored and the Mexiverse is saved, but this prevents Juan from returning to his own timeline. Recalling an earlier conversation, where it's said that El Otromundo connects all the timelines together, he leaps back into El Otromundo before the way closes and looks out across the great many indistinguishable portals.

In the normal ending, Juan's family awaits his return for many years, before he eventually appears. In the true ending, attained if the player clears the Chicken Illuminati's crucible and meets the Holy Hen, Juan recalls her advice and removes his mask, immediately identifying the correct portal and returning to his family without delay.
------------------

I ended up getting the normal ending for the game.  I didn't feel like going through all of the rigamarole to get the "good ending".  One thing that I didn't like about this game was the "twitchiness".  Once you unlocked the flip-into-the-mirror-dimension skills, it seems like many levels were about being able to not only navigate the maze, but concurrently switching and forth between the two dimensions, while also jumping and launching yourself from various wall-hangs.  I did master this enough to get to the end and finish the game, but it just was not fun...

What I loved about the game was the whole "mexiverse" and the DC Crisis in Multiverse feel to the game.  And, of course, all of the popular culture references that are just packed in this game.  Overall, I'd give this game an 8/10.


Some game stats from my run: