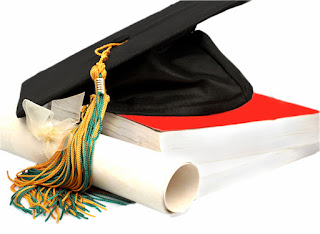 It's been a while since I last just sat down to think and write about something (like the good old days when I was cMOOCing...).  These past few weeks have been about conferences, and getting back on track with my dissertation proposal (although I think I am the only one who is keeping a score on that at this point).

In my attempt to get back to writing, and engaging with friends and colleagues out there in the wild blue yonder which is the internet, I thought I would pick through my accumulated Pocket list until it's almost empty.  One of the ponderings of interest came by means of an article on Inside Higher Ed titled Academic Identities and Terminal Degrees, where the overall question was: Does one need an academic terminal degree to identify professionally with that discipline? And, as Josh goes on to explicate

Can only someone with a Ph.D. in economics call herself an economist? Do you need a Ph.D. in history to be a historian? How about sociology and sociologist? Biology and biologist? Anthropology and anthropologist?

My views on the topic have changed in the past fifteen years; where I basically compare my views as someone who just finished a BA, to my current views...on the road to a earning a doctorate (are we there yet? 😂).  Originally I would have said that someone could call themselves something only if they've earned a degree in that field. I think today I would call that by the term protected professional title, and a degree or some sort of certification would be a way to demonstrate that you've been vetted into that profession somehow by somebody. Now, which titles (economist, linguist, archaeologist, biologist, etc.) are protected, and up for grabs...well...that's a subject for debate! At the time the only means of obtaining that expertise (in my mind) was through formal degree programs.

Since that time, in addition to completing a few masters programs and discovering new fields and new knowledge, I've also discovered the power of the network, the potency of communities of practice,  groups such as virtually connecting, and expanding my own learning and practice outside of the classroom.  My current feeling is that it's not really as black and white at my younger self thought.  I do think that obtaining a doctorate in the field is one path to getting there, but it's not the main criterion to developing your identity in that field.  The main criterion that I have (at this point in time anyway) is practice and expansion of your own skill set in that field. I guess a good way to describe this is through some examples that came to mind while I was trying to tease it out for myself:

Example 1: The non-practicing PhD
A few years ago I was a member of a search committee looking to fill the position of a program director for an academic program at my university. Among the requirements for this position was a terminal degree (PhD or EdD being defined in the job search posting).  We got a variety of CVs from interested applicants.  In reviewing CVs I noticed an interesting cluster of applicants: those who had earned a terminal degree (four, five, six, ten) years ago, but had no publications (or other academic work) under their name other than their dissertation.  Their dissertation was listed on their CV, but nothing else. I am not saying that publishing in academic journals is the only way to demonstrate academic work. You could for example be presenting at conferences, presenting at professional association workshops, writing for a blog or professional publication (basically translating academese to professionals). These job applicants had none of that, so they were demonstrating a lack of practice and continuous improvement in their field.  So they had earned their badge of honor by completing a doctoral program but there was no follow through.   For individuals like that I'd have a hard time calling them an economist, a biologist, a demographer, or a whatever.  I'd called them Doctor so-and-so, but they - in my mind - are not an embodiment of what it means to be a ___________ (fill in blank).


Example 2: Word ambiguity
When I was close to finishing my degree in Applied Linguistics I came across a podcast and a blog of someone who called himself a linguist. I was really happy to come across this podcast and blog because I could continue to learn about a topic of interest once I graduated (and also while I was in school), and this was exciting because back then there weren't really that many linguistics blogs or podcasts around.   My working definition of linguist a person who studies linguistics (where linguistics is the scientific study of language).  This is how I've always understood linguistics.  The person on the other end of this podcast was not a linguist in that sense.  He was a linguist in the dictionary sense of a person skilled in foreign languages.  Personally I'd call that a polyglot and not a linguist. Although, I don't think that it would have bothered me too much if this person called himself a linguist if he didn't really start to preach in his podcast about the best way to learn a language.  I find that at that moment he crossed the line into the domain of what I consider linguists: those who are either clinical linguists (for lack of a better term), and those who are teachers of language and take an inquisitive and critical approach to their teaching and either share what they've learned through their research (published or not). This individual calling himself a linguist was neither a teacher, nor a linguist (in the scientific meaning). Hence the more accurate term that I would use is polyglot not linguist.


Example 3: The practicing MA graduate
In many fields conducting an MA thesis is the only means to graduating from your Master's program.  Even if you don't conduct a thesis to graduate, but you've studied research methods, and continue to hone your skills of inquiry, and continue to read up on advances in the field, I feel like you have the right to call yourself a ________ (fill in relevant blank), if of course there isn't a regulatory board for your profession (nursing, medical, legal, accounting, and other profession of that type). There are many smart people out there who do a lot of work, and who diligently work on keeping their knowledge and skills updated.  Some of them even research and publish.  Through their continued efforts I think that they've demonstrated that they are serious enough about their profession to be included in that group that calls themselves a ___________ (fill in blank).


At the end of the day, for me, an academic identity isn't necessarily tied to a degree earned.  A degree earned on someone's CV might give you clues as to what their academic identity is, but it's not the only consideration.  I think that practice and application are key considerations when you're deciding where you are in the group, or you're not.  I think if a word has double meaning - as with example #2 - the thing to do is stick with the more accepted or widely used meaning, instead of something that isn't used.  I think it's the honest thing to do.