#edcmooc - Where do you want to go today? Build that bridge to your utopia 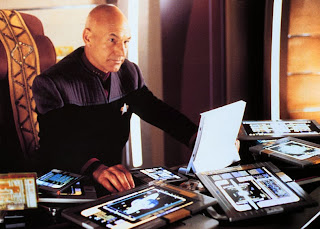 So, we are at the end of Week 2 of #edcmooc and we are wrapping up the unit on Utopias and Dystopias, and everything in between (because thing is really that black and white). As with the week before there were some videos to watch and think about. I think that the no-lecture-videos format works well.  I like to see what people do with certain conversation starters and where they go with them. As I said last week, even though this course is run through coursera it's very much a cMOOC format to me.

One of the videos presented was the video bellow on bridging the future.  Honestly this video seemed really cool, and a nice proof of concept of what could potentially be done with technology. Students, in this case, seem to be using junior versions of tools, like CAD, that professionals use to do their work. This seems both useful to learn concepts, but useful to also begin learning the tools that are used in real life for these types of tasks.  The one concerning thing that I saw was the lack of books.  Don't get me wrong, I do my fair share of reading on eBooks, but those tend to be non-academic.  If I need to have several books open at the same time an eBook just doesn't cut it.  I don't have the money for five iPads to do what people did in Star Trek with PADDs. I am also wondering what the cost of these things are.  I know that the overall cost tends to go down over time, but I also considering the cost of not equipping classrooms everywhere with this, thus expanding the gap between the haves and have-nots. While this future is cool, it's no utopia, and it's no dystopia.  As I said before, one man's utopia is another's dystopia. What's important is what can we do with this setup that our current setup does not allow?


As a side note to the video discussion the video "A digital tomorrow" (see bellow) was pretty funny.  It may seem dystopic at first but I think that it's probably indicative of what the future may look like.  There will be some pretty interesting technology, but it won't work as well as the advertisements say it does, or as people imagine the future to be: flawless and everything works.  The visuals also reminded me of the jPod TV Series.

On the article front, the articles were pretty interesting reads, but I'll only focus on two articles: Metaphors of the Internet and the article on Peer Reviews vs. Automated Scoring.

The metaphoers articles brought me back to my days as a linguistics student (a few years back) with the mentioning of emic and etic perspectives.  It also reminded me of schema activation from my same applied linguistics work.  It was pretty funny to me how Rheinghold is painted as an internet critic and critic of "other forms of electronic communication [who] often cite[s] commodification as a problematic, destructive force on the Internet," especially since it was written in 2009 and by the Rheinhold seemed to have become an internet "convert" and advocating the harnessing of the internet and the social element in it to amplify our collective intelligence.  Is this just an honest oversight of the author? Or a case of selective bibliography or interpretation?

Metaphors are pretty good at getting people started with understanding a new thing.  They activate schemas in our existing knowledge that help connect what we are learning to what we already know. They are, however, only a beginning. Our understanding of the new should go beyond the connecting with the old. We should understand the nuanced differences of the old the new.  This article reminded me that when the internet was young, and I was starting to learn about it, I didn't have any metaphors for it.  Computing was also new to me,  my English was improving since Greek is theoretically my native language, and existing metaphors like "highway" really meant nothing because my notion of "high way" (Εθνική Οδός) was essentially no different than a long stretch of 2.5 lanes.  I guess my notion of the internet was a place to find things. Maybe the best metaphor I could come up with is the notion of the bazaar.

In the other article, one of the things that really came to mind was that there was way too much emphasis placed on the grading aspect of the essays (raw score) and not enough emphasis on the commentary aspect of essays.  When someone grades a paper, or any assignment that is something other than formulas, there are two aspects: the raw score from a rubric and comments on the essay. Even if someone gets a perfect score on their essay, that doesn't mean that they've reached the apex of their performance,  They can still do better and improve, and this is where instructor comments come in.  You can get 100% on an assignment, and at the same time you can improve your work. You do this by reading the comments from your instructor (or more knowledgeable other) and you apply those to your day to day work.  Mechanized, or peer grading, can give you the same raw scores for some very basic essays, but the commentary for improvement won't be there, not to mention that when essays stray from a prescribed format they will be graded wrong even if they are not.

Finally, in the forums there was also a lot of great activity. I went in an up-voted a few things that stood out to me, but it would take more than one, two, or three blogposts to discuss all the interesting sparks of the imagination in the forums.  For the time being I picked one thread that ties into my others MOOC thoughts.  This thread was: "Would you pay for a MOOC?" The question was:

Would you pay for a degree taught in MOOCs? More importantly, and a topic in and of itself, would businesses and industries hire people who have learned in this type of environment?

Jen Ross asked in this discussion:

Great post, Alan - maybe the question isn't so much 'would you' pay, but 'how much' is a MOOC worth? What is it that we pay for when we pay for education?

I honestly think that the way things are today what we pay for is Accreditation.  Of course that presupposes a valid pedagogical model and faculty contact time, however one may measure that. This, in the US, seems to mean measurement of "butts in seats" time in many instances. So having a subject expert teach for a certain amount of time, and then passing some sort of summative examination ties together to give us accreditation. This may seem like a really bleak view of education, but with many people going to school for employment purposes, that seems to me to be the main impetus for payment of educational services.

I personally wouldn't pay anything for a MOOC. A MOOC is open, and thus, for me, free. The certificate of completion that coursera, udacity and EdX hand out at the end does not mean much in the real world at the moment. However it is a nice momento of my time in the MOOC! Like others said in the discussion thread, I would probably donate the cost of a cup (or two) of starbucks coffee toward the MOOC if it help support the infrastructure to make the collaboration possible. But, paying as a pre-requisite to participate - no.  Hamish Macleod pointed out that he contributes to wikipedia every now and again because it is a valuable tool for his job. I think that this is an apt analogy for MOOCs.  Furthermore, I do think of open in MOOC as free.  Content usually isn't open as in OER open, so open must be free.  Otherwise, what could open mean?  Open to enrollment?  So are collect courses, and have been for quite some time. So what? :)

I also liked this quote from Roberta Dunham

MOOCs are great ways to share learning without having to deal with the organized higher education syndicate.

I think Roberta hits on an important point, and one of the intents of the original cMOOCs. I think we've come full circle, and if we haven't yet, we may be pretty close.  Keep thinking freely :)

Last thought (more of a don't let me forget type of thing), the issue of accessibility came up this week in #edcmooc; accessibility of two types.  On the forums accessibility was discussed from a health standpoint with people with disabilities and access to MOOCs; and on twitter the issue of the digital divide (and I would add to that computer, information, and critical literacies) and access to MOOCs.  This is a major topic in my mind - but subject to a future post :)