WWW literacies and the importance of self archiving

Here we are, week 2 of module 3 (so week 6) and half-way through the formal run of connected courses.  I spent most of last week catching up with stuff that was piling up in my Pocket account from previous weeks. In all honesty I wasn't quite sure what to make of this module.  Pretty much all of the things that were readings failed to spark my imagination, given that I had either read similar things in the past, or I had actually lived through them.  The thing that really started to spark my a few things was Mozilla's Web Literacy white paper. Then I was having a conversation with fellow MOOCer Luis, in real life, about literacies and then it hit me.  How do people engage on the web, in a cMOOC? Luis was telling me about issues with engaging with a cMOOC and fellow participants out on the web, and how the other two xMOOCs he is following along with seem much more engaging.  I think that this is because they have a form and format that graduate students know to recognize, whereas cMOOCs do not. In order to engage in a cMOOC you really need to be playing at the Connecting level of Web Literacies, and not everyone is there yet. 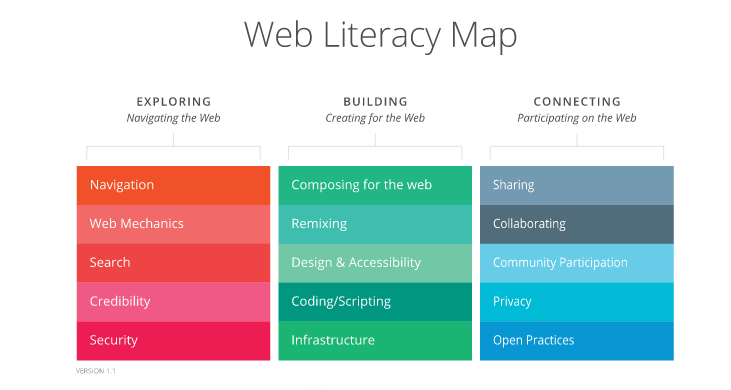 This reminds me of the guest lecture we had from George Siemens in my EDDE 801 course earlier this semester. He had mentioned, that at least to his knowledge, most of the effort in the research has been on getting people up to speed with the technology (the mechanics) rather than actually using the technology for educational purposes and analyzing that.  This seems to jive with my, anecdotal, observations of what's happening in the classrooms that I have access to, and the thought processes of fellow faculty members (e.g.: "we'll teach them the tool, not expect them to make something with a tool we provide no instruction on")

The interesting thing with Mozilla's web literacy map, at least for me, is that I started early.  The Exploration literacies were acquired in the mid-to-late 90s, the Building literacies in the late 90s and early aughts, and the connecting skills in the early-to-mid aughts.  These were mostly done through browsing (Netscape 3.0 anyone?), the building through hand-coding HTML, then through WYSIWYG, and through experimentation with javascript and flash, and the Connecting literacies through participation (and later on moderation) of forums, and a Greek blog that I was maintaining at the time. This graphic made me realize three things:

1. It put into words nebulous concepts that I've been thinking about since I've been thinking about designing my own MOOC, and infusing technology into my own traditional online courses.  I expect my graduate students to be at the Connecting Literacies stage, without seeing where they are first.  Now granted, not everyone will reach the coding, scripting, infrastructure stages of Building, however I do believe that everyone can compose, and remix, and design to some level! Those can be leveraged to get learners to share, collaborate and participate in open practices. How one designs assignments for that that go beyond the "here's the tool, now let's learn about it" and get to the "let's make cool stuff with this tool! You'll figure it out!" is the next nut to crack.

2. In thinking of my own journey through the acquisition of these literacies (mostly through trial and error), I realized that I learned and honed these things over the span of 20 years. I've had a certain privilege (and curiosity to pursue it) that others may not have.  The question then, for me, is how can we rapidly on-board people so that they don't take 20 years to reach a certain level with those literacies?

3. Self-archiving is important. I really wish I could show people early versions of my website.  I know that Archive.org has some versions of my website archived back to 2001 (which isn't bad!) but the public versions of my site were actually on good ol' Geocities initially. Before blogs were the in thing, I used my website's announcement and news page (usually the homepage) to write publicly once (or twice?) a month. This was a way for friends to get a quick snapshot of what was happening with me when I came to college.  It was also an opportunity to pick a new song (in midi format!) to share with anyone who came to the page. The stupid thing would autostart and you either listened to it, or muted your speakers. Talk about bad user experience design :).

Each month I just hit delete on that old content and updated the HTML file with the new news. Once Yahoo bought Geocities I decided to pay the small fee to get rid of the ads and the website became more elaborate.  Not that I have an awesome website today, but it has seen an evolution from 1996 when I started it (offline version) to now.  I think being able to illustrate someone's steps (and missteps) in developing those literacies is important.  If you don't self-archive, no one will :)

So, what thoughts did this module provoke?
Apostolos K. ("AK")
See Older Posts...