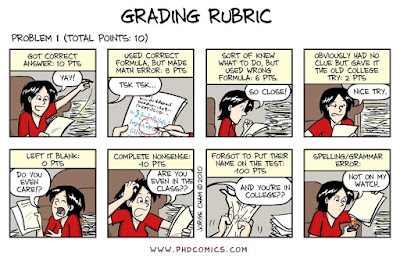 The other day I came across this PhD Comics strip on grading rubrics. As a trained instructional designer (and having worked with instructional designers on and off since I started university as an undergraduate student) the concept of rubrics has really stuck with me.  That said,  I generally struggle with rubrics.

In theory they are brilliant - a way to objectively measure how well someone has done on whatever assessable assignment. On the other hand, they are not that great and they could be a means for discontent and discord in the classroom (the "why did you indicate that my mark is in category B when it's clearly, in my student mind, in category A?" argument). For this reason I try to create rubrics that are as detailed as I can make them.  That said, it seems that detailed rubrics (like detailed syllabi) are rarely read by students ;-)

Another issue arises with inherited courses. When I've inherited courses from other people that's also a source of an issue with rubrics.  It seems that their rubrics are less detailed and more subject to interpretation - which in my mind doesn't help the learner much - and it does little for consistency between faculty members who might teach the same course.  Here is an example (redacted to try to keep assignment and course somewhat anonymous. It is an intro course though): 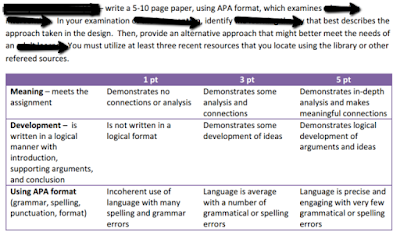 Using this Rubric, I would say that two people (who don't know each other) teaching the same course can potentially be giving two different marks for the same assignment.  What's important here is the feedback given to the learner, so the mark may not matter as much in a mastery grading scenario, and the (good) feedback gives them a way to re-do and improve for a better mark if they want.

The more I design, and the more I teach, I am wondering if detailed rubrics are better as a way to on-board professors and instructors into departmental norms, and if broader rubrics are better for the "student view" and used with a more mastery-based approach to learning. :-/