Random draw from the comment-box! 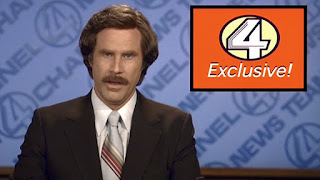 I tried to come up with a witty title for this post, but I guess maybe it's didn't work out ;-).  Anyway...yesterday as I was working on my proposal I thought "hey...I haven't seen George Siemens blog recently..." which also made  me wonder when the last time I blogged was. Not as long as George (that's for sure ;-) ) but long enough.  So I thought I'd pull together some random streams that have been whirling around as disconnected strands.

First, one exciting thing that transpired between the last blog post and how is that not one, but two, members of Cohort 6 have completed their EdDs!  Both Lisa (@merryspaniel) and Viviane (@vvladi) successfully defended their work and are one step away from commencement and official conferral of the degree :-).  Lisa's Dissertation is already available at the institutional repository (click here) if you'd like to read it.  For Lisa and Viviane it's a major victory completing their doctoral work, but it's also a small victory for us in the sidelines plugging away on our own work.  It's another positive example that there is light at the end of the tunnel! :-)

Another exciting thing that happened since the last blog is that one of our RhizoCollaborations earned an award...sort of.  The 2018 GO-GN (Global OER Graduate Network) gave one of our papers an Honorable Mention.

An Honorable Mention is given to Aras Bozkurt for ‘Community Tracking in a cMOOC and Nomadic Learner Behavior Identification on a Connectivist Rhizomatic Learning Network‘, co-authored with Sarah Honeychurch, Autumn Caines, Maha Bali, Apostolos Koutropoulos and Dave Cormier, and published in the Turkish Online Journal of Distance Education (TOJDE).

This was a total surprise because I didn't even know that we were in the running, so the fact that we were even nominated for this was something amazing. When Aras and other co-authors posted and retweeted on twitter I got a rush.  It reminded me of the rush I felt back in 2011 when our MobiMOOC Research Team earned a 'best paper' award at mLearning 2011, which was also unexpected.  I also feel that the recognition is actually amplified by the fact that this was a collaborative effort. While I would have been proud to have my work awarded even if I worked alone on the deliverable, I think the fact that there are other team members to share the glory with makes the nomination even more magnificent.  These individuals have, over the years, and through our collaborations, played a role in my own learning, and I hope that I've contributed to their own growth it in some way.

Finally, there's my own dissertation proposal in the works.  Still plugging away at it! I am behind where I thought I would be, but I am making progress.  I now have a co-supervisor as well.  My initial (main co-) supervisor will be retiring in 16 months, so just in case I am still plugging away at my dissertation by 2019 we're making some succession plans. Although I really, really, want to be done by July 2019 at the latest. As much as I enjoy being in school, I don't enjoy paying program fees ;-).

From the most recent round of comments, my Introductory chapter and Methods chapter needed some tweaking and/or adding to.   I spend during this last week or so working on the first chapter which has now been tweaked. This weekend I needed a breather before I moved on, so I started looking at the Research Ethics Board requirements.  I created an account at AU's REB site, and I started plugging away at the (multiple) tabs that required my project's information.  After a couple of days most tabs are complete.  The REB application isn't ready for submission though.  I'll hold off until my committee thinks that the proposal is defendable, and then I'll make sure that what I've plugged into the REB application matches any subsequent edits to the proposal.   There is still the issue of recruiting my 3rd committee member.

Alright... back to work I got!