You are being watched, every minute of every day... (research ethics) 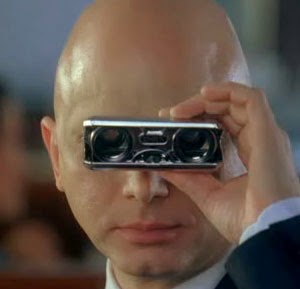 Last week I was somewhere between work, teaching, the NERCOMP symposium I co-facilitated and the annual Sloan Consortium Emerging Tech for Online conference. It was nice to see some familiar MOOC faces on both twitter and on the live stream presentations.

I think it was in Jen Ross's presentation (of EDCMOOC fame) that a Rhizo14 participant was quoted anonymously.  I really didn't think much about it at the time. It was more of an "wow, I didn't think rhizo was really that well known outside of some crazy circles."  In any case, it turns out that the quote was from the autoethnography that we are working on (slowly but surely I guess), and that no permission was sought to use the quote.  Before I knew the specifics the prompt on the rhizo14 facebook group was:

I have to admit that my gut reaction was "someone's watching? Who's reading our stuff?" But, I should point out, that this isn't indicative of a negative reaction, but rather a gut reaction (that reptilian brain kicking in).  I have the same reaction when someone I barely know says that they like reading my blog or that they have read my insert-title-here article about insert-topic-here.  I am simply unaccustomed to having people read my stuff, even though I've published a few academic articles and I keep working on this blog, and on the club-admiralty blog. When people cite my academic work in their academic articles it doesn't bother me (it's actually sought out!).  If people want to cite or quote my blog posts, go for it!  It's open!  But the autoethnography was a little bit different.

I see the autoethnography, at least the document we have up on the web now, as a work in progress.  As a place where people can post their stories, and then a bunch of us will come together to "make sense" of everything that was put into the document, and create a final version of "results" or "findings" where we might perhaps quote a few people to illuminate or substantiate the claims we make about the trends we saw in rhizo14.  I see this as similar to what Dave, Bonnie, Sandy and George did in the MOOC model for digital practice. In the process of going through and creating this final findings paper, anyone who did not wish to be quoted would have their wishes respected.  They still participated in providing data to be considered as part of the whole, and we'd get valuable insights, but we would simply not quote them.

I think that there is something qualitatively different between having an internal community, working on a project, out in the open, and deciding collaboratively what to do with the data; and someone outside of the community looking at that incomplete data, who may not have a full picture because they either aren't a member of the community or they are a lurker who may have a partial image of the community.  When a community works on something there is less of a chance that something will be taken out of context, whereas if someone external is dipping in, the chances are higher.

At the end of the day, taking one quote out from a document thats huge isn't a big deal to me.  I personally would have asked permission to use the quote if I were not part of that community.  I think the bigger issue is the aspect of open data, which I am in favor of. As researchers, when you have open data available, and you know you are working on something, does it then become an "arms race" to get your work out before someone else beats you to the punch? I know that we still have this perception of publish or perish in academia, and that we have tenure, promotion, and reputation, tied to publishing (more so than other means of measurement of academic success and productivity), so are open researchers putting themselves at a disadvantage by putting unrefined data out there for everyone to see?  I don't know.

The other issue that came up, again, are the ethics of online research.  To be honest, I need to do more research into what "the experts" (those who write textbooks) say about this.  There is such a breadth of ways to conduct research on the web that seeking permission to use what's out there for every instance is simply unnecessary, yet still ethical, in my book. Open websites, open communities, open blogs, public twitter posts and so on are fair game in my book for data analysis without consent. You may disagree, and that's fine.  We can debate this, but from where I stand, it would be disingenuous of me if I got annoyed if someone used my blog posts as part of their research. I write in the open, and anyone who is writing in the open, should expect that people are going to read, reuse, talk about, critique, and disseminate my writings.  If I don't want that, why not make my blog private? In which case, a researcher would have to seek permission to gain access and use my writings for research.