This week's Change topic was a nice break for me, allowed me to take a moment, catch up with other people's blogs, and the weekly session (which I made an attempt to visit while it was live, but I somehow missed it) was loose enough to allow for this break.

In any case, the topic of this week was "Triangulating, weaving and connecting our learning." I've written before about disconnected knowledge (although I forget if it was a blog post here, somewhere else, or a comment on someone else's blog...) and disconnected knowledge is an issue when teaching and learning. One can't learn facts and figures in isolation, they are meaningless and we end up forgetting them anyway. If we can put them to use, that is one form of making these facts meaningful to us and thus providing for a mechanism to remember them.

This week's topic reminded me of a mentor that I had in one of my master's programs. When I was a first-semester graduate student in the instructional design program the program director helped me to start mindfully (or consciously?) connecting all of my previous education and knowledge to what I was doing. I had a gut feeling about how things connected with each other, but when people saw my resume their first comment was that I lacked focus.  After all, I was some with a BA in computer science who loved languages (in their minds two separate things), who went on to get an MBA with foci in IT and Human Resources, who then went on to an MS in IT, an MEd in Instructional Design and then wrapping it all up with Applied Linguistics.

To most people it seems like I am jumping from discipline to discipline, but I always saw some sort of connection between all of them, it was just hard to articulate it to others.  It seems like both in Academia and in the "real world" there is an emphasis in specialization (or hyper specialization once you get to PhD levels), and this specialization entails some sort of certification that in the minds of people clearly delineates one thing from another; however some people don't seem to realize is that it is all connected. Some links are stronger and some links are weaker, but when it all comes down to it, there is no such thing as "no connection"...just a lack of the ability to see connections :-)

In order to try to explain the method to the madness, I ended up creating a mindmap of how all of this previous knowledge, education and interests fit together, although I think that this is rather simplistic.  I can "see" more connection if I drill down deeper, but without some sort of 3D diagram it will just look like one big messy spaghetti bowl ;-) 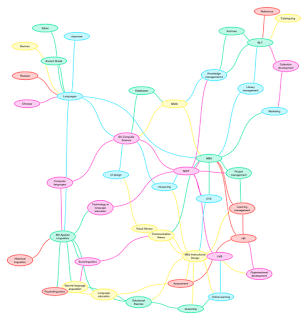