DALMOOC, episode 1: In the beginning 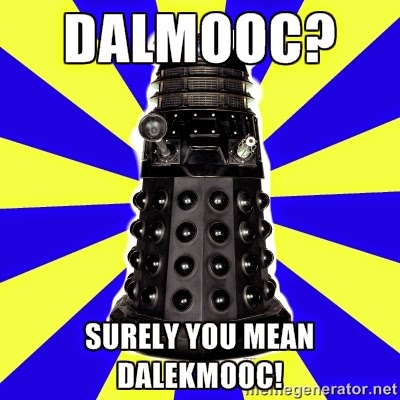 Alright, I guess it's time to start really committing some braincells (and time) to DALMOOC, the Data, Analytics, and Learning MOOC that started last week on EdX.  I wasn't going to attend this MOOC, to be honest about it, but seeing that George Siemens was behind this, I knew that there was an experimental aspect to it. Learning analytics is not new to me, my first MOOC (cMOOC) in fact was LAK11 (Learning Analytics and Knowledge) which I jumped into right after I finished my Applied Linguistics studies.

So, now that I have cleared my plate of a number of coursera MOOCs (decided to give myself the "audit" status and just download the videos for later viewing - maybe in January or something), and that most of my assignments are done for EDDE 801, I can devote a little more time to writing in the open web about academic stuff and ponderings about academic stuff.

So, what brought me to DALMOOC? The first thing that brought me to it is this xMOOC/cMOOC structure that I've written about before.  A pure xMOOC, for me, is like TED talks.  I see little incentive to do assignments for xMOOCs (although I must admit that my track record on edx is a little better than on coursera). A cMOOC can be overwhelming for some, but the chaotic structure is appealing to me.  I like getting content from peers.  Videos don't always provoke me to think outside the box, peer's postings sometimes do, and that's where the spark of thought occurs and provokes me to think about things that I haven't thought about before, and to elaborate on things that I have thought about for both my benefit and hopefully other's benefit (the whole "being the teacher helps you make headway in your own learning" theory).

Once I signed up I discovered other great aspects, beyond learning analytics, about this MOOC.  The opportunity to mess around with software like Tableau for example is great, and getting to try out ProSolo. I had tried out Degreed.com and Accredible.com last summer but they seemed lacking that social aspect.  ProSolo (from the 15 minutes I've spent in it thus far) seems like a social network infused with learning.  Maybe I am reading into this, but from the recommendations I get, it reminds me a lot of the Recommender System that I had proposed for MOOCs two summers ago :-).  Anyway, I am looking forward to exploring ProSolo more (and probably reporting back here).

In any case, what's my game plan here? Explore the software for visualization of data, like Tableu, probably view a few videos each week, but I guess the core will be spend on ProSolo and on blogging.  Like other cMOOCs I've been part of I plan on picking up on what others write in their blogs and go from there.  The chaotic nature of cMOOCs does not scare me (I come armed with Pocket for later reading!) I will most likely not be part of the forums because they are usually a time-sink and there is no way to save posts for later reading.  This is one thing I liked about the forums of MobiMOOC, things came in the mail, I read the forum post, and if I had something to say I could respond right from my phone.  Perhaps this is the next user-interface innovation needed in xMOOCs, but I digress.

OK, I'm off to see where the daily digests are going for DALMOOC and watch this space for more sparks of thought on this MOOC.
Apostolos K. ("AK")
See Older Posts...