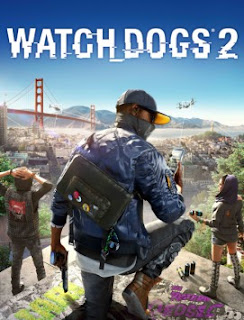 Alright!  This is it! I think I've caught up with my game reviews from games that I've played over the past few years! 😂. This one I finished in November 2021.

For this one, I returned to Ubisoft's Watchdog franchise. I loved the first one, and I was looking forward to this second one.  Now that the next Watchdogs is out (well, it's been out for a while), I thought I should catch up with all my Watchdog games before I try other things 😛

Anyway, in this game you play a hacktivist (Marcus) who operates around the San Fransisco area.  I've never been there IRL, but from movies and TV shows that I've seen, that take place around the area, I ended up recognizing a lot of landmarks.  It was also a lot of fun to reconcile in my mind's eye the post-apocalyptic landscape of San Franscisco in Defiance with the modern-day landscape portrayed in Watchdogs 2.  Let's just say that I had many "aha" moments! 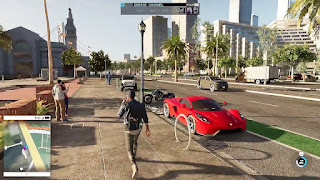 In 2016, three years after the events of Chicago, San Francisco becomes the first city to install the next generation of ctOS (central Operating System) – a computing network connecting every device together into a single system, developed by the technology company Blume. Hacker Marcus Holloway, punished for a crime he did not commit through ctOS 2.0, decides to join the hacking group DedSec (composed of hackers Sitara Dhawan, Josh Sauchak, Horatio Carlin, and "Wrench"), and conducts an initiation test by hacking a Blume server farm to wipe his profile from the system. DedSec determines that the new ctOS can covertly harm innocent citizens across the city, and thus decides to bring about awareness of their goals through conducting a social media campaign to recruit, by exposing corruption and crimes being conducted through the system, before bringing down Blume.

After several successful exposures, Josh discovers a number of irregularities in their follower numbers. When Marcus investigates this, he learns that DedSec has been used by Blume's CTO Dušan Nemec, in order to sell ctOS 2.0 to those frightened at being hacked. Forced to leave the city for a while, DedSec partake in a hacking event in the desert, and encounter legendary hacker Raymond "T-Bone" Kenney. Interested in assisting them, Kenney joins DedSec as they work to continue their fight against Blume. After hacking the server farm of a major internet company, the group use the data they acquire to pursue and expose corruption amongst law enforcement officers, politicians, and numerous Silicon Valley corporations. During this time, Marcus also focuses on bringing down several criminal syndicates, after one gang murders Horatio for refusing to assist them with their operations, and thwarts Dušan's attempts to disrupt DedSec's operations through a rival hacking group and the FBI.

Eventually, DedSec comes across information about the data manipulation program called "Bellwether", designed by Kenney, and learn that with both this and a new satellite network, designed to bypass undersea data cables, Dušan plans to manipulate world finances and politics, thus creating a monopoly on the entire world's electronic data. To expose this and his corruption, DedSec co-ordinates a massive operation to allow Marcus to infiltrate Blume's San Francisco headquarters, hack their servers, and feed the information of Dušan's crimes to the police. While Dušan is arrested for fraud and Blume is put under investigation, DedSec resolves to continue their fight against the company.

In an extended ending scene added in a post-release patch, two unidentified individuals note that more DedSec cells and hacktivist groups have been emerging worldwide in response to the San Francisco Blume scandal, and that it is time to put their own plans into motion. The filename of the recording seen in the ending is a set of coordinates located in Brixton, London; foreshadowing future events. 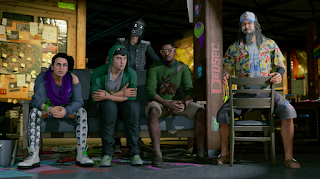 Overall I really liked this game (as seen by my achievement completion rate).  It was A LOT of fun driving around San Francisco. The game was also a lot of fun, which lead me to complete all of the one-off missions (main missions and side missions).  I think I played one or two of the repeatable missions, but those I didn't pay as much attention to after the novelty factor wore out.  I did end up buying a lot of guns and ammo, but it was easier to play in stealth mode and avoid major conflicts.  Getting away from the cops once the sirens start going is a major pain.  It's hard fun, but I don't want to stir up the hornet's nest unnecessarily.   I am looking forward to the next one!

Some stats from the xbox app: