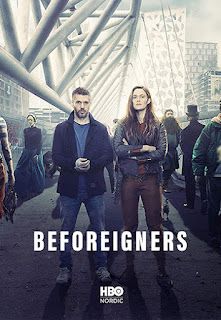 A portmanteau of "before" and "foreigners" (if that wasn't obvious).  I subbed to HBO Max to watch the new Matrix movie and I stuck around to see what else existed that I didn't know about.  I guess that's how they get you! There are spoilers, so stop reading now if you don't want things spoiled...

Beforeigners is a Norwegian production that follows Lars and Alfhildr, two cops in Norway.  The wist is that Alfhildr is from the past, more specifically the Viking age.  It turns out that portals exist that bring people from the past into the present day, and there are efforts to rescue these folks (time portals seem to be in the water, so people emerge from the sea) and help them integrate into present-day society.  This isn't a distinctly Norwegian anomaly, it seems like timeigrants (time + immigrants) exit in other parts of the world.  Lars and Alfhildr head to London, for example, in season 2.

The interesting development in season 2 was that time seems to flow both ways, and people from the present have been sent back to the past, some of whom find their way back to the present. The villain in season 2 is one of these folks, and he wants to go back in time to prevent life from ever happening on earth, this way humans would never happen.  In the socking finale, we find that Alfhildr is not only a two-way traveler (something we saw a built up to throughout the season), but she is also Lars' granddaughter 🤯🤯🤯.

I need to rewatch it in Norwegian.  The dubbing was really problematic and in some parts, there was just dead air when people spoke in languages other than Norwegian. I hope there is a season 3!