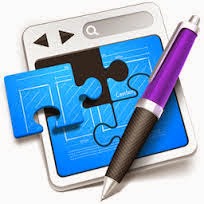 It's been a long time coming, but RapidWeaver 6.0 is out!  I have to say, I haven't kept up with RapidWeaver as much as I have in previous years because I had gotten my website (club-admiralty) to the point where it was OK. Not too bad, not good enough, but then again not enough time to really mess around with it, so I stuck with RapidWeaver 5.  I've been using the product since version 2.0, and each new release was something that I purchased. Sadly, the Mac Mini that I use is a 2009 model and it won't be upgraded to Yosemite, which RW6 requires.  Too bad.

However, I did think that it was now a good time to go out and snag a few plug-ins for version 5 before those were retired and hard to find.  Specifically I've been looking for some better way to display my social media activities on the site, and a better way to integrate my Tumblr photoblog. I ended up getting Stacks (something that I've been eyeballing for a year or so now), and a few stacks to go along with it.  All in all I am quite happy with Stacks, it's actually what I wanted Blocks to do all this time, so I've been busy re-designing some pages that I made with Blocks a few years ago by using stacks.  Of course any upgrade is probably not going to go smoothly.  I didn't realize that I had installed an older demo of stacks on my mac, so my newer stacks-plug-ins weren't showing... It took me a while to determine what the heck was wrong.  I ended up upgrading all of my plugins, and rapidweaver to the latest versions.  Quite a few updates pile up when you're not paying attention.

Then, my blocks pages weren't working...what the heck?!  Generally speaking, since I am changing all Blocks pages to Stacks pages, long term this isn't an issue.  However I still needed the old blocks to harvest the content.  Luckily the old plug-in was in the trash can and I was able to retrieve it for some quick maintenance work.  OK.  Crisis averted...until I realized that the files weren't saving...

After emptying out all plug-ins and testing each version successively I discovered that the latest version or rapidweaver, version 5.4, one one right before 6.0 which brings in final functionality (and export ability to 6.0) has some bugs and just doesn't save any files (unless you export to a 6.0 file format, which is useless to me. Arg...  Luckily version 5.3.13 of rapiweaver was in my trash so I salvaged that as well.

After that little detour I am now slowly working on a minor upgrade to the website, probably out in the new year since I am working on it part time.  This experience brought me back to the days of computer troubleshooting when I was a computer tech person.  Fun stuff, albeit a bit aggravating when you want to get work done.
Ο Φοβερός
Comments