Just before the Christmas break I decided to give Star Wars: The Old Republic a try.   I am definitely much more of a Star Trek fan, but I decided to give this game a try anyway.  It is free-to-play, so this was definitely a draw.  The game takes place a long long long time ago, in a galaxy far far far away.  As a player you have the ability to pick from six classes: a Jedi knight, a Jedi consular, a Sith Warrior, a Sith Inquisitor, an Imperial Agent, a Smuggler, an Trooper, or a Bounty Hunter.   Unlike Defiance and STO, it seems that the story arc is different for each of these classes, which promises for a lot of re-playability, even if you are nor into the MMO elements.

For my first walkthrough I've opted to be a Jedi Knight (very imaginative, eh?).  As a free-to-play player I get two free character slots, so if I end up liking the game I might go through as either a Sith Inquisitor, or an Imperial Agent.  Anyway, as a Jedi you start off in Jedi Training and you end up exploring the training grounds of the Jedi.  Some being (flesh-somethings) seem to be gaining Jedi powers, so you are off to explore that.  Since this game is made by Bioware, it reminds me a lot of the game Mass Effect.  The dialogue that occurs in the game has branching paths which allows you to garner support and influence over your allies.   Knowing what happened in Mass Effect - that your actions never really impacted the end-game scenario, makes me think that I can be as big of a bad boy Jedi as I want and not really worry about the repercussions.  I guess we'll see ;-)

At the moment I think I am on the last part of the single campaign (without taking into account any expansions).  I am on Tatuine undertaking some missions.  It's amazing how boring large deserts are to go through ;-).  The nice thing about this game is that there are quite a few side missions, and weekly "heroic" missions that allow you to go explore the world, so there isn't a lot of opportunity to feel bored.  There seems to be something for everyone, and it seems like a game where you can fairly easily level up.  I am currently at level 38 after only about a month and a half of playing part time.  As a free-to-play player I can only make it to level 50, while paying players seem to be able to go beyond level 50 to level 65. 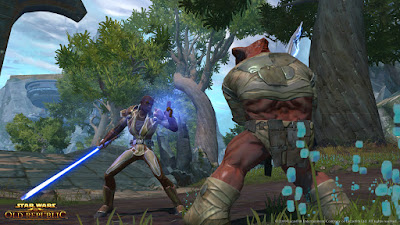 I guess I'll see how I feel about subscribing to this game once I am done with one of the Sith classes, but at the moment, unlike STO, this game doesn't feel like something I'd pay money for. I like it, but unlike STO there isn't a lifetime membership, and the monthly cost seems a little too much for my own tastes.

One of my pet peeves is that I can't seem to get a screenshot of my character. The game takes over my screen, and if I move to another application window on my second monitor the thing crashes...

Do you play SWTOR?  What do you think?
Ο Φοβερός
See Older Posts...