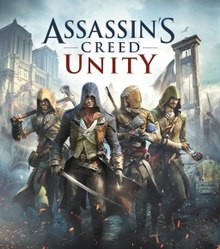 It's been a while since I last played an Assassin's Creed game on a console, owing mostly to the fact that I didn't have a current generation console to play the 'newest' games on.  I think the wait was quite worth it, for a few reasons.

Assassin's Creed Unity is the next game in the series after Assassin's Creed Rogue.  Your main character is Arno Dorian. If you played Rogue you know that Shay Cormack (the protagonist in that game) killed Arno's father. I found this quite an interesting linking between games. The story of Unity starts with the real life 'you' as an Initiate in the Helix (basically the Animus 2.0) playing a story of a templar who's obtained the pieces of Eden that Arno is basically looking for in the game (so a little prequel to the game before the game).  In the game you play as Arno, as a kid while you go through the ropes learning how to play the game, and later on as an adult as he ventures out in to the world. 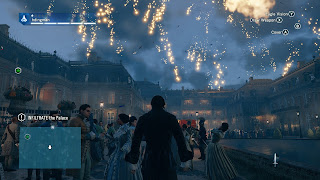 Arno, the kid of an assassin is adopted by a templar grand master who raises him like his own son. Then, when Arno is older the templar is killed by...other templars!  This kid just has bad luck all around with parental figures! Anyway, the story takes place during the French revolution. There is unrest with the country, with the templar order, and the assassin order.  Everyone seems like they don't like what the establishment is doing, and murder is in the air (and trying to blame others for it).  In the end Arno is a changed man, and changes how he views the Creed.  I absolutely loved the final ending speech

Overall the game mechanics were fine. I was a little disappointed by some of design choices of the game.  Some skills that you just had or unlocked in previous games through the game now became skills that you had to collect initiate-points for to unlock in a skill tree.  Do you really need a skill tree to 'learn' how to throw a pouch of money at a crowd to distract them? Bah!  Also, gone are the whistling to attract enemies (or was that from Splinter Cell?) and the ability to drag bodies off to the side and hide them so that other enemy NPCs don't get alarmed. Other than those changes the gameplay felt very much like an evolution of older games I've played, so something familiar and comforting.

While I have completed the game, there is a companion app that you can keep playing some missions with your Assassin Nomads.  In the original conception of Unity you needed to play, and complete, everything in the companion app in order to get all the goodies unlocked in the main game.  This seems like a bad design decision, and I am glad this requirement was removed by the time I got to the game.  I can see how it would be frustrating to players to have to spend at least a month in this other app to get things cleared in the main game (which includes certain artifacts showing up so you can claim limited edition weapons or uniforms).

One thing I did notice in this game (which sadly seems to have also made it into Syndicate) is the multitude of currencies.  You have period-specific coin for purchasing stuff like throwing knives and health potions from vendors.  You have assassin sync points for leveling up your character.  You have helix credits for...well, unlocking shortcuts in the game (like chest and artifact locations), and you have hacker points for improving weapons that you buy with coin.  Too much!

The one thing about Assassin's Creed that I would have liked is a way to bring over all of my unlocked items from past games.  So, if you've played all past games, all past uniforms and unlocked special uniforms should be available right as you start the game.  Yeah, you might look a little weird in Victorian England or Ptolemaic Egypt sporting a Napoleonic Uniform, but let's not forget that in the animus/helix you're basically in a VR game, o who cares? The NPCs probably don't. They don't care that you are scaling walls and jumping from roof to roof like a madman ;-)

My goal was to make it to 100% achievements, but I rage quit after I couldn't complete The Tournament Co-Op on Solo (doable, according to youtube, but I was always a few seconds short so I desynched)

Overall I'd give this a 9/10.  I really liked it, and I might be going back (at some point) to complete the co-op missions or get better scores on missions.