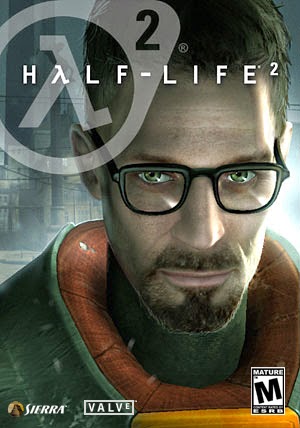 Back when Half-Life, the original, came out (November 1998) I was a freshman in college.  I wasn't really paying attention to those types of games for three reason: lots of work, lots of school, and no windows PC.  I was a Mac person, even back then, and we did not often get windows games to come out around the same time on our platform.  I wonder if things have changed these days - as my raptr profile shows I do most of my gaming on console.  In any case, when I started working at Barnes and Noble, textbook department, Half-Life was all the rage among some of my fellow computer geeks.

Fast forward to 2012.  I am working in Instructional Design and one of my colleagues is amazed that I haven't played Half-Life 2, because it - apparently - is quite a good game.  Alright.  Once I had an xbox I got the orange box and I started playing it.  In the game you play as Dr. Freeman, apparently the protagonist of the first game.  I started the game in 2012, played a bit, but I ended up not picking up the game for another two years (i.e. until recently).  I got to a point where  I got stuck and I guess it was easier to put it down (or did I rage quit?  I don't remember).  The point here is that I don't really recall what the heck happened at the beginning of the game when I picked it up again a few weeks ago. I looked up a plot summary on wikipedia, once I realized that I wasn't sure what was going on.  The wikipedia summary didn't help much because I wasn't sure who this mysterious G-Man is, why Freeman was in stasis, and what I was doing in City 17.  I guess this was explained in the original (should have been included in the orange box!).

Anyway, I thought that in order to avoid rage quitting, and making some progress, I enabled god mode, which allowed me to basically go through the game as a terminator and taking no damage (yay!).  Cheating?  Perhaps it was, but my goal was to play for the story, not to see how long I could survive in a post-apocalyptic totalitarian state. Once God mode was enabled the game was actually quite fun!  It was OK before, but messing around freely in a world without fear of death is actually quite fun.  The episodic nature of the game (I played episode 1 and 2 after Half Life 2) unraveled a really nice plot.  The story telling was good, and the gameplay (at least in God Mode) was really great. I liked the Eastern European aesthetics and I found myself stopping to read signs written in Cyrillic.

The one disappointing thing about this game is the ending, or rather the lack of it.  It seems that Valve, the developer, decided to create episodic content for this game, and thus each episode ends in a cliffhanger of some sort.  Well, guess what - there is no episode 3 (and there probably won't be from what I've been reading on the web), and the game ends with a load of questions.  For someone who plays most games for the story element this is quite disappointing.

Overall, I'd give Half-Life 2  and 8/10 score.  I don't think I will be playing this game again anytime soon.  If the ever come our with further episodes I'll reconsider :)
Ο Φοβερός
See Older Posts...