Tenure is a red herring! 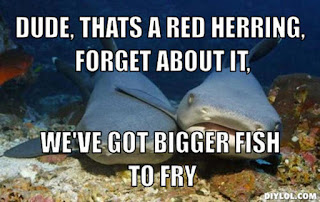 Last weekend, while I was enjoying something on television, my iPad buzzed and kindly informed me that a few people I follow on twitter were all tweeting about #whytenure.  Woah! I thought!  What's this?  Is there something earth-shattering happening with tenure?  I had to find out.  I saw some tweets, favorited them (for later digestion), and went back to my show. It seems to me that this was a reaction to Wisconsin and Gov. Walker's most recent attempts to mess with higher education in that state. There is no doubt that feelings around tenure, both in Wisconsin and outside, are pretty charged. I see blind acceptance of tenure as a given by most people I interact with, but I don't see why (despite their arguments).

I am one of the few people, that I know in my circles, that holds the unpopular opinion (among people in academia) that tenure is an outdated institution and what's on the drawing board needs to be erased and re-conceptualized from scratch.  Tenure is like communism (ha! I knew that one would make you raise an eyebrow!) in that it's fine in principle, but the way it has materialized and been implemented over the years doesn't even do justice to the original intent.  For instance the AAUP defines tenure (briefly) as:

Tenure, briefly stated, is an arrangement whereby faculty members, after successful completion of a period of probationary service, can be dismissed only for adequate cause or other possible circumstances and only after a hearing before a faculty committee.(source)

Most pro-tenure arguments that I see, both on the web but also in person revolve around the notion of academic freedom.  Being able to research a topic that isn't popular, being able to teach and get knee-deep topics that are potentially touchy, or sensitive for people, or even employ new pedagogies that aren't the way "students want to learn" (e.g. sit back and listen to a lecture) but engage in active learning (believe it or not, there are students who complain about having to do stuff in class). Free Speech is also invoked but that seems like even more of a misdirect as free speech protects you from the government, not from other institutions.

This automatic support and defense of tenure seems to come from those who are already on the tenure track, or are tenured. Of course, those individuals are the minority of those who teach in academia.  Some of the arguments for tenure, from the twitter #whytenure are as follows:


First of all, I think some of the arguments put forth on twitter are just far fetched or not corresponding to reality (or at least how people actually act in academia in their tenured roles).  For instance, when @RabiaGregory claims that State Universities need tenure because they protect taxpayers, and serve all citizens, how does he envision that they do that? I don't blame  @RabiaGregory for the shallow comment, twitter is a crappy medium for serious discussion like this, but what do state educational institution protect citizens from?  As stakeholders in state institutions, why do we (taxpayers) not see more local students accepted to them instead of out of state and international students†, and why don't see see all intellectual production released as Creative Commons and/or OER for the benefit of all? @RabiaGregory's argument seems hollow to me because the opportunities afforded by tenure seem squandered and only come up when tenure is in the cross-fire.

The education argument, argument #11 by @effieCraven , is also a bit hollow.  I applaud people's efforts to continue their education (look at my own educational credentials, I've been in higher education for more than 10 years already).  However there are two issues to contend with:
I don't want to seem like I am dissing people who have opted to continue their education.  I applaud such curiosity and thirst for knowledge - you are in good company - but I don't think the entitled attitude that comes off on twitter is serving those lifelong learners well.

In terms of market forces governing (or not governing) academic research, as @cinemiasma puts it - wrong again.  If you are looking to get grants for yourself and your institution market forced do guide what you are doing.  Some people are like the honey-badger, they don't give a....well you know, so their research isn't governed by market forces. However, if you want to apply for and get grant money then you do need to know what's hot, what's "sexy" (ugh... dislike applying that term in this way), and what will get you the grant.  If that isn't the definition of market force - your skills, background, proposals vs others, I don't know what is.

Finally, from the tweets above (and from other conversations) it seems that people think that tenure encompasses shared governance.  From my (admittedly rudimentary) readings of what the AAUP puts out I don't see a connection.  I see shared governance as important, but not connected with tenure. There are places that have no tenure, but have shared governance.  Now, I'll be a bit of a radical and state that shared governance (and departmental committees) these days should encompass more than just faculty (tenured or even non-tenured). These committee workings determine not just curriculum but also how a department functions and department policies beyond the curriculum. Back in ye olde days when we didn't have distance education programs, when our programs we smaller and local and basically held in a classroom with a blackboard; all the administrative support needed was of the clerical in nature, and perhaps faculty-only governance was all that was needed.

These days, with online and distance education programs, with the amounts of students being accepted, with the pressure to "grow" our programs, with the types of reporting that we need to do (and many other considerations) people in positions such as mine need to have a seat, a voice, and a vote at the table where important decisions are made.  Yes, I am an administrator by title - I am also an instructional designer, a technologists (you know, all that education I have), and a graduate program director (in all but title).  There are things that program administrators, instructional designers, technologists (and so on)  can see (and foresee) that faculty committees alone cannot. We can do things that they cannot, and we are here year-round, when they are not. This is not a criticism of faculty. They have not been trained to do these administrative roles, and probably most of them went to school to be scholars and teachers, not admins.

Why have academic initiatives, which need faculty input, grind to a halt in June, July ,and August, when faculty are "off" (they are, after all, only 9-month employees, on the academic calendar)? It might seem like we are trampling over your academic freedom when we (other professionals) are suggesting something‡, but in reality some things aren't related to your academic freedom but you throw out the term like a live grenade, like a shock-word, to stop people from discussing valid issues. but I digress. As I said, shared governance has nothing to do with tenure ;-)

Now, those that hear me say that tenure needs to go automatically assume that I also do not value academic freedom and employment protections afforded by tenure.  Nothing could be farther from the truth! I think that employment protections are well deserved for all employees who have demonstrated competence for that work during their probationary period. In extraordinary circumstances, such as wholesale department closures, no one is safe from layoffs. However if the position continues to exist, then the person who demonstrated competency should be allowed to keep it.  I also believe in academic freedom.  We should be able to talk about things and explore topics that aren't popular. We should be able to do it in ways that we think are valuable for our learners.  Luckily, these days, we do have IRB protections from people who might want to do things in an ethically-suspect way (no more Stanford Prison Experiments!)

However tenure does have some major flaws in my view:

One of the comments piqued my interest but was a little ambiguous. I blame twitter for not being able to determine what the intended message was (it's hard to express oneself in 140 characters for topics like this).  The comment is as follows:

@VSouza_STL Adjuncts need better conditions, but no one is helped by dragging down others. Tenure protects academic inquiry. #whytenure by: @ASFried

I don't know if @ASFried meant this in a "yeah, there are problems with adjuncts, but don't you mess with our tenure, go find your own ball to play with", or "yeah, there are problems with adjuncts, and let's work toward giving those people tenure". I certainly hope that it's the latter and not the former.  However, I don't have faith that many people with tenure are willing to take on the scepter to support the adjuncts who are currently without it, and thus change the tenure landscape of academia.  If people who have tenure were willing to do this we wouldn't be seeing a continued erosion of tenure and the (amazing) drive to unionize adjuncts across the country - to get those protections that they didn't have because their tenured colleagues didn't do much to help.

Finally, tenure has a PR problem.  I am sure that we could re-work tenure to address all of the issues above, but most people see tenure like this: 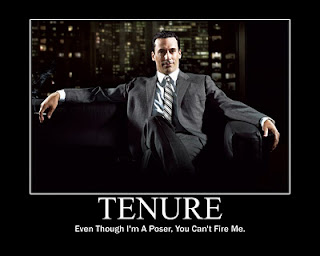 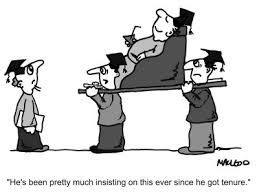 The problem isn't that people outside of academia see tenure like this, but that people inside of academia see it like this as well, even other faculty.  They might not acknowledge it openly in debates because their tenure would be scrutinized as well, but how many times have you thought that some of the exercises you undergo each year, such as post-tenure reviews (which are supposed to ensure "productivity" continues after tenure) do you see as a pointless waste of time since that person will not be laid off or axed regardless of the offense?  Security is good, but it comes at a price (and sometimes bad actors).

Tenure's bad PR means that people are not paying attention to the good things that tenure is meant to ensure (job security and academic freedom). By getting rid of tenure, but keeping the core ideals alive in other forms (such as good union contracts that also protect adjuncts), we can create a new system that is more egalitarian, more diverse, more fair, in order to move forward together.


SIDENOTES:
† The cynic in me says that we entice international and out-of-state students to come because their tuition is higher, despite the fact that state institutions have a responsibility to the people in their own state.
‡ Oh, I don't know, like making your course on blackboard more accessible? -or perhaps using a department style guide we developed so that courses look like they come from the same department
Apostolos K. ("AK")
Comments