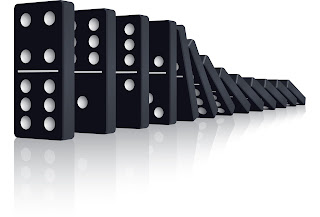 I don't often write about my dayjob - as manager of an academic program. There are probably a lot of interesting and nuanced things to study academically in higher education administration and non-profit management, things that I also find interesting (from time to time) - but I tend to spend most of my time looking at EdTech, pedagogy, language learning, and the like (more so than higher ed administration.

Recently I saw a blog post from a friend who is also pursuing a PhD that made me put on my management academician thinking cap, and it got me in a reflecting mood as far as my dayjob goes. It also brought back fond memories of me being an MBA student in a supply-chain management. The successful running of an academic program is a complex dance between various external (to the academic department) actors, such as the admissions office, the registrar's office, the bursar's office, and the room scheduling office (if your program is on-campus). This is also in addition to internal actors such as curriculum committees, admissions committees, faculty, and advisors, and the students (I think of students being "in" the department).  If we look at it from Actor Network Theory, there are also those devices that facilitate (or put up roadblocks) for our efforts. One big actor in this network for me is Google Docs given that I use it to plan for a lot of things.

I've been in my position over four years now and it's been quite an interesting, and educational, experience. Some of our faculty are tenured, and some are adjunct lecturers - although they've been with us so long that we really think of them as one of us.  One thing that really has stood out to me, comparing the then with the now, is really how important those connections are, and the domino effect of the supply chain.  When I was a student studying supply chain management it was fascinating to see how changes in the factory output, the connections between factories, the warehouses, stores, and pricing made a huge systemic difference in what was happening in the end‡.

When I started working there had been a gap in that position for the program, which meant that there wasn't really a day-to-day maintenance that was happening (nor was there systematic improvement). One of the things that had lagged behind (seriously behind) was communications with current students and communications with prospective students.  That for me was a huge domino that had already fallen and we were seeing it's effects - lower than average applications. Why would one apply to a program if there isn't good communication?  Effective, and timely, communication is important not only with your perspective students, but also your current ones in order to ensure that prospective students find the right program for them (even if it isn't yours), and current students are on a steady path to graduation. An internal policy of 2 business days (at most) to respond to inquiries and emails seems to have solved that issue.  Email also became the preferred method of contact. This doesn't please everyone (especially those who like talking on the phone), but with limited resources it's the most efficient.  Phone conversations are available for more in-depth and tricky subjects, not "routine" questions.

Another area where I see supply chain as much more prevalent is course registration.  Course registration is probably the major cause of departmental firefighting (we're all familiar with putting out fires, right?). It's was also a bottleneck for hiring and assigning courses to adjuncts.  In a nutshell, prior to my arrival† students were able to sign themselves up for classes.  This left made course sign up the student's responsibility. There is something empowering about signing up for courses, but even with a late registration fee (if students registered after a certain date) many students would simply wait to register. This meant that we didn't know if some courses would run (you need to have a minimum amount of students in each course to make it viable). Not knowing if something would run also means that you couldn't commit to assigning specific courses to our adjunct faculty, which meant that they didn't have access to Blackboard and the resources they needed to plan for effectively for their courses. It also meant that for the students who did sign up early, there  might be a mad dash near the beginning of the semester to change courses if their courses were axed.  Lots of fires to put out right there!

The solution, which seems to work, is to prevent students from enrollment activity and have us (in the office) enroll them for courses, and to make sure through advising that all advising is accounted for and a month before the current semester ends students have spoken to their advisor and we know what courses they'd like to be signed up for. This gatekeeping activity has been pretty successful thus far.  About 85% of students see their advisor and are queued up for fall courses 45 days before the semester ends, and around 10 days before the late fee kicks in, 94% are signed up.  Not too shabby if I do say so myself!  Having an (almost) 95% completion rate also means that our faculty have a better idea of what they are teaching in the fall so that they can prep over the summer (if they'd like) and the college and HR departments can start processing their fall contracts earlier than before since we have confirmed enrollments. These contracts also mean that instructors gain access to university resources that they need  - such as email access!


NOTES:
‡ I also hated the grading schema for that class, as I've probably written in this blog before, but the class was pretty interesting all things considered.
† I didn't singlehandedly do this - it was a team effort, but I did initiate a lot of this
Apostolos K. ("AK")
Comments