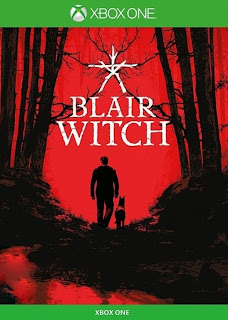 Digging into the "Finished some time ago" pile, this game was completed on 7/25/2020. This was a gamepass game that I wanted to try to finish before my gamepass expired.
Coming into this game I knew of the Blair Witch Project. I remember the trailers and all the hubbub in the late 90s, but I have never seen the actual films.  The shaky cam in the previews didn't appeal to me.
So why play this game?  Well, to try to get the story without the movie! 😂 This game is a first-person survival horror game. You play the role of Ellis Lynch, a veteran, and former cop, who goes back to a town to search for a missing kid in the woods. Along with you, you have your trusty side-kick Bullet (the dog). Ellis definitely has PTSD, and perhaps he shouldn't be there.
In the woods, you find various items that help you along in your journey to find the missing kid, and items that fill you in the lore/story of the game.  The game uses red camcorder tapes that you can load up on your camcorder to review footage.  As you do this, you are also able to manipulate the physical environment around you. So, if you can't pass through because a tree had fallen on the road, find the red tape that has the path on it, and rewind the tape to when the tree was still standing, and voila, the road is no longer blocked. 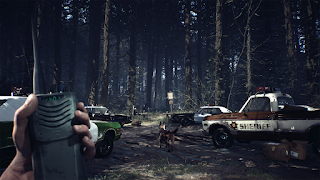 In the game, you have a walkie-talkie, that allows you to speak to other rescuers. you also have a cell phone which allows you to connect with your significant other, but of course, reception is spotty in the woods. From what I recall, depending on how you handle communications during the game, the ending of the game adapts to those choices. Overall, the game did achieve the "end of your seat" feeling (at least for me) and it get the blood pumping!  I had to look up some of the significance of the iconography (since I didn't want the movie), but that didn't prevent me from enjoying the game. 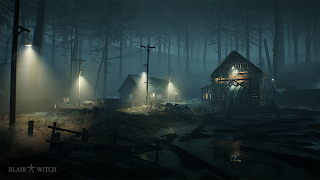