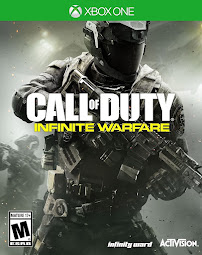 So far I've enjoyed all of the Call of Duty games that I've played, so I thought I'd give this futuristic take on the franchise a go. I think it was something I got during one of the seasonal xbox sales.

Anyway, in this game, you take on the role (if I remember correctly) of Captain Nick Reyes, who is a Special Operations pilot. This game has both ground elements (typical of CoD games) and flight combat, which was a lot of fun (at least from what I remember...I really should jot down my thoughts as I play...).  Anyway, the ground combat has mechanics similar to what you see in Titanfall, things like enhanced jumps and wall-running abilities which made this game a ton of fun!

The story pits the UNSC (UN Space Command) against a colony that wants to secede, and the colony goes on the offensive against targets on earth.  The story is reminiscent of Titanfall, and of other sci-fi fiction, like The Expanse. 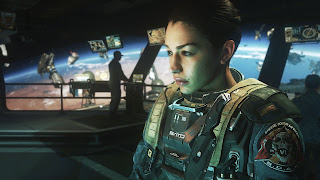 The overall game play was a ton of fun, the story was great, being on the bridge of a space carrier was awesome!  I am honestly disappointed that InfinityWard has yet to produce a sequel to this game! I don't know if they caught any flack for being too similar to Titanfall, but I think I enjoyed this game (as a single player) much more than Titanfall.  There is a zombies component to this that I have not played yet.  Maybe something for a later date.  The CoD Zombies games have never really caught my eye, and zombies give me the heebie-jeebies... 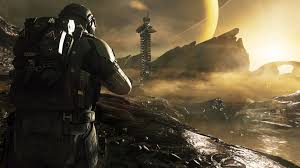 In the far future, a UNSA special forces team is sent to a secret UNSA weapons research facility on Europa to investigate an SDF attack and recover a UNSA weapon prototype before initiating the facility's self-destruct. The team is able to destroy the facility, but fail to recover the weapon and are captured by the SDF, where they are subsequently executed by one of the SDF's main commanders, Admiral Kotch.

On Earth, Reyes warns Admiral Raines that the SDF attack is tantamount to a declaration of war and that the UNSA should be preparing a counterattack. However, Admiral Raines explains that the UNSA's leaders do not want to escalate the situation, especially during the Fleet Week celebrations where the entire UNSA fleet gathers at Geneva. During the celebrations, he links up with his wingman Salter as well as his new robotic subordinate E3N "Ethan". Suddenly, the UNSA's defense cannons begin to open fire on the UNSA fleet, decimating many ships as an SDF assault force invades Geneva. Reyes manages to fight his way to the AATIS control tower, where he manages to shut down the AATIS cannons and apprehend Riah, the SDF spy responsible for sabotaging them. Reyes then accompanies the surviving UNSA ships into orbit where they destroy the attacking SDF fleet. The SDF's flagship, the Olympus Mons, suddenly arrives and destroys more UNSA ships before it is forced to retreat, leaving only two operational UNSA ships: the carrier Retribution and the destroyer Tigris.

Upon landing on the Retribution, Reyes learns that both the ship's captain and the executive officer were killed in battle, leaving him as the highest-ranking officer of the ship and its de facto captain. Admiral Raines promotes Reyes to commander and orders him to retake the cargo port on the Moon from the SDF. After successfully liberating the Moon, Reyes is tasked with delaying the SDF for as long as possible until the UNSA can rebuild its fleet. At this point, Reyes can embark on a number of optional missions to attack key SDF targets. Eventually, Reyes manages to destroy a strategic refueling tower on Titan, crippling the SDF's fuel supply. Later, he is sent to investigate a disturbance at an asteroid mining station near Mercury, only to find it was a diversion while the SDF destroys the Tigris, leaving the Retribution as the sole remaining UNSA ship. Learning that Riah is carrying a beacon meant to signal the main SDF fleet to invade Earth, Reyes devises a plan to use the beacon to lure the SDF fleet right into the still operational AATIS guns. Unfortunately, the plan goes awry when Riah escapes, destroys the AATIS guns, and kills himself to trigger the beacon. The main SDF arrives and the Olympus Mons destroys UNSA headquarters, killing Admiral Raines.

Realizing that there is no way for them to get back to Earth alive, Reyes rallies the survivors of the Retribution crew and leads them on one final, desperate assault on the shipyard. Most of the surviving crew are killed in the fighting, but Salter manages to commandeer an SDF destroyer. However, its weapons are disabled and the mooring clamps are locked. Ethan sacrifices himself to destroy the moorings while Reyes activates the destroyer's weapons and orders Salter to destroy the station, despite him being on it. Salter reluctantly opens fire, ejecting Reyes into space. His last sight is seeing the SDF shipyard explode before shrapnel from the explosion punctures his suit, causing him to suffocate.

Some time later, the UNSA honors Reyes and the Retribution crew's heroic sacrifice, stating that their destruction of the SDF shipyard was a decisive victory and that the SDF has been all but destroyed as a result. Salter, who is one of only four survivors from the Retribution, salutes a war memorial in Geneva listing the names of all of the UNSA soldiers who died in the conflict, including Reyes.

During the credits, the recorded messages of some of the deceased Retribution crew may be heard.

From the xbox app, here are some scores: