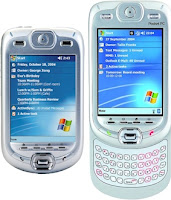 Windows Mobile. So much promise...So much frustration ;-)

After a hiatus from Windows Mobile (after mu iPaq), I had decided to try windows mobile again.  At the time HTC seemed to be the golden child of the industry when it came to windows phones.  They made reference designs that other companies could use or rebrand.  One such design, which caught my eye, was the HTC Blue Angel which was rebranded as the Qtek 9090, SPV M2000, Dopod 700, Qtek 9090, T-Mobile MDA III, i-Mate PDA2k, XDA II and so on.  The model came to Cingular at the time as the Siemens SX66.  I really loved the O2 version (XDAIIs), which retained the camera (which Siemens removed because corporate clients didn't want cameras...due to security...blerg...)


Out of the box it came with Windows Mobile 2003, but unofficial "cooked" ROMs for Windows Mobile 5, 6 and 6.1 became available on different forums like xda-developers.  Windows Mobile 2003 was still annoying.  Near the end of the device's life, I got annoyed and it met a wall forcibly ;-).  I tried to give it some extra life by loading cooked Windows Mobile 5 and Windows Mobile 6 on it, but it was too little too late.   I really loved the form factor, but the chicklet keyboard left A LOT to be desired.  I had used a Blackberry phone before this and I actually liked the feel of the keyboard a lot.  I was hoping the same would be true for the Blue Angel, but I was sorely disappointed.  The keyboard actually went mostly unused, and eventually, I switched to a Nokia S60 phone.

There were other phones that HTC made that I loved the design of (but I never got).  Two of these were the HTC Universal, which was a convertible phone. The keyboard was larger, and you were able to use it almost like other messenger phones (like the sidekick) which worked best on the landscape orientation.  By comparison, the Blue Angel felt top-heavy.


HTC Touch Pro 2 Specs (2009):
One of the things that HTC started doing (when Windows Mobile as an interface wouldn't really cut it) was to create an overlay UI called HTC Sense. This put a more usable face on top of Windows Mobile's (aging) interface.  I do believe that HTC sense has also been moved to their android line of phones now, making it one of their distinguishing characteristics. 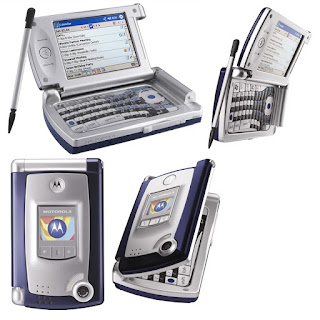 Finally, one phone that I was really looking forward to, but never came out officially, was the Motorola MPx. The MPx may have come out for developers, but it never really saw the consumer market.  This phone was a convertible flip phone.  You could use it in landscape mode with a full keyboard (which doesn't look all that comfortable), or you can use it as a flip phone.    I thought that the forward-facing media keys were innovative for the time, and the dual-hinge meant that you could use it as a 'regular' phone most times, but flip into smartphone mode when needed.  I think it ran Smarphone OS, which was Windows CE-based, like Windows Mobile, but it was different, so I am not sure what the app compatibility looked like

Finally, it's worth looking a bit at Windows Mobile 6.5  Microsoft's last-ditch effort to "save" a current product and evolve it, before they went with Windows Mobile 7, which was totally new underneath the hood (I think), with a new user interface (Metro), which meant a complete re-launch of Microsoft's mobile phone line - which...SPOILER ALERT...they managed to bungle as well...

From what I remember Microsoft wasn't fully invested in Windows Mobile 6.5, but it is worth noting that they changed the interface of the OS from something that resembled Windows on the desktop, to something closer to the Zune interface (their failed attempt at a media player).  It wasn't a bad effort, but I think it was too little too late by this time. By this time (2009) iOS was in its third iteration and the iPhone 3GS was close to being out the door (this is my first iPhone since I wasn't all that impressed with the original and the 3G). One of the innovations here is that microsoft now had a store that people could buy apps from them and install without sideloading.  I remember back in my iPaq and HTC days, the only real way to install applications on your Windows Mobile, or Palm device for that matter, was through sideloading.  You needed to buy the software separately, either on CD or via an online store.  Run the hot-synch function while tethered to a computer, and run the executable installer on your PC.  The Apple AppStore really did revolutionize this, and it's amazing that no one else had done this before...

It's too bad really.  Microsoft had a commanding lead, in my opinion, both in the enterprise and in the consumer market (thanks to HTC), but they really squandered it.