Back when I started my graduate studies, I decided to leave the Apple Newton behind (I know, sacrilege, eh?) and get a more "modern" PDA.  While my Newton did support unicode (probably the first platform to do so natively, I think), the unicode was not implemented, so typing in Greek was a pain. I had to either use Greeklish, or use the Symbol font to display contacts (which made my non-Greek contacts look odd).  I didn't particularly like PalmOS (it seemed like a step backward), but PocketPC seemed like a good contender.  Thus, I went to the Compaq website and ordered myself an iPaq PocketPC.  I bought myself an iPaq 3870 which had a few expansion options and came with Bluetooth.  My goal was to pair it with my Bluetooth enabled Ericsson T68 to surf the internet from time to time.

Hardware & Software out of the box

The 3870 looks like the 4th iPaq on this list of devices.  The unit was compatible with Compaq's sleeve system where the iPaq could be slid into the sleeve to either provide device protection or to expand the device by adding a Compact Flash slot, PCMCIA slots, WiFi, an analog TV and Radio Tuner, a camera, a barcode scanner, and my favorite: a sleeve which added GSM/GPRS so you could make phone calls, send texts, and browse the internet from your iPaq.  I think that Compaq was really ahead of its time with these sleeves, and we've only (relatively) recently seen Motorola use this approach with their Moto Z line of phones that use MotoMods. 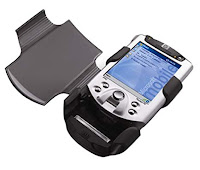 My device and I think all devices, came with the default screen protector sleeve, which you can see on the second device.  The specs on my device were:

This machine was obviously built for business (and heck, as an MBA student it seems like it was a good fit! for a while anyway...).  The software that came with it was pretty business-focused (no surprise) and included things like:

AvantGo is an idea that is still with us today in the form of  Pocket.  The idea was that you followed certain websites that were AvantGo compatible (CNN, MSNBC, etc.).  Even if a website wasn't compatible, AvantGo on your PC would work its magic.  Then, AvantGo would create offline versions of the site and load them onto your AvantGo viewer via synching.  This way you'd have your commuting newspaper to read while you were not connected.  One of the things I did end up getting for my iPaq was a GPS puck.  It was a GPS receiver, with Bluetooth, that connected to my iPaq.  This, along with Garmin maps (I think they were garmin) made for my first GPS unit for my car.

Later models of the iPaq included things like built-in wifi, cameras, and fingerprint scanners. I think the last model of the line was the iPaq Glisten, which was a direct competitor to Blackberry (it had a built-in keyboard). 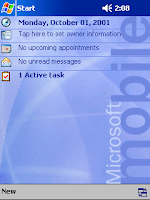 The unit I had actually came with PocketPC 2002 OS, but Compaq provided a free upgrade with PPC2003 came out. Both of these screenshots are indicative of what PPC2003 looked like.  The homescreen graphics were modifiable, so I had Palm, Newton, Apple, and other OS images showing on my iPaq.  When I had an HTC Blue Angel (maybe this is info for another post) I also had other mobile operator logos on my phone.

The user interface was pretty much of its time.  There was a dashboard, which was customizable, which showed the user's information at a glance. By default, you could see your to-do list, your mail (synched via HotSync when you were at a computer), and your calendar appointments.  Applications that you installed had the option to include a homescreen widget, so things like AvantGo also showed up here.  Games that were similar to tomagotchi also had a homescreen presence I think.  The windows menu was how you accessed all of your applications.
There was no Greek (or any other non-latin-based alphabet) by default, but there were plugins (which cost additional money) that enabled this on your phone.  They worked OK.  I never really was 100% satisfied with how Windows PocketPC handled internationalization.  The unit would also slow down from time to time which necessitated an erase-and-reinstall process.  I don't know if this was really helping, or it was all psychological on my part.  I remember friends with windows machines (prior to Vista) that did this periodically to their PCs. 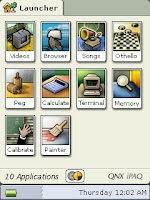 When I got sick of Windows PocketPC, I attempted to breathe new life into the iPaq I had, and someone over at QNX (a real-time OS of the time) had ported QNX onto the hardware as a trial.  I liked the BeOS-style visuals so I experimented a bit with it (probably for about a week), but since it was an experiment or proof-of-concept, it never really had any third-party software, so I flashed PPC2003 back into the device.  I wish this had caught on :-) 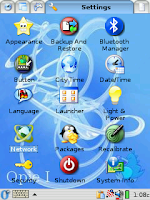 PPC2003 wasn't really doing it for me.  It was OK, there were enough games on the device to make it entertaining, but I had issues connecting to the network over Bluetooth, the device got painfully slow at times, and I kept feeling like I needed to reset it.  I discovered that there was a Linux port (Familiar Linux) for the device, with two different UIs.  One looked like Aqua on MacOS (OPIE) and another one was based on GNOME (GPE).  I loaded this on my iPaq and played with it for about a month. 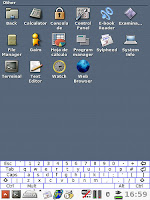 It was a fun excursion into the Linux world, but I came across the same issue as with QNX.  Granted, more people had ported more apps over to Familiar, so the device was more useful because of it, but it still didn't really scratch the itch for seamlessness.  I did enjoy playing around with mobile linux at the time, and I am surprised that people have yet to crack that nut; I know Android is technically Linux, but I am thinking of other companies like Canonical.

In the end, I ended up flashing PPC2003 back on my device and gifting it to a friend who wanted to mess around with it.  I also ended up replacing both my iPaq and my T68 for a SonyEricsson P800 (a story for another blog post)

Windows PocketPC was killed off by Microsoft when they changed direct with Windows Mobile 7, and their Metro interface.  There had been a plan for a Windows Mobile 6 (PocketPC renamed to Mobile with the 5th edition), but as far as I know that never made it to market.

Do you have any memories of PocketPC?