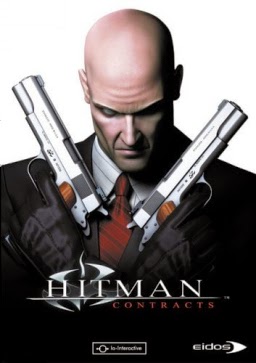 Well, that didn't take long!  I guess it was a combination of having the holidays, and playing this game on normal mode that made it seem like a breeze.  Hitman: Contracts is the second game in the Hitman Trilogy HD collection, and the third in the series as a whole. It still follows Agent 47 around his contracted killings work. I think this game was a bit of an improvement over Hitman 2 (see recent blog post).

The story is told in the form of flashbacks. Agent 47 is injured (probably coming back form some mission) and he is being patched up by someone (I didn't really catch who).  As the game progresses, I do believe you are playing the missions that got you here, culminating in a half-done missions where you've already killed a tenor (why would you do that?) and you just need to kill of the chief of police and escape France.  In all honesty, even though the story was better this time around, I didn't bother listening to Diane tell me who the targets were in the final mission, and why - I just wanted it to be done!

The visuals were better this time around, probably because this game was made in 2004 with next generation consoles in mind, so things were given a few more development resources.  Lip-sync is still quite off which makes this video game seem like a semi-badly dubbed Japanese film. I suppose it could be worse and you can have ventriloquists as actors like the second one ;-)

As far as the missions go, there were 12 of them and they all seemed pretty disconnected, with the exception of a three or four mission arc of framing some Triad in Hong Kong (so as to instigate Triad war?).  Not sure what that was about, but then again if you are a real hitman I suppose that you don't care what the before or after is, you just go in to do what you were paid to do.  From a story point of view, we leave the game with the Diane and 47 on a plane, leaving France, and we hear Diane say that the Agency is compromised.  I wonder if this arc continues into the 4th installment (Blood Money) or if it's an aborted storyline.  I guess I'll find out soon.

I earned a few more achievements  here, and I finally got a "silent assassin" rating on one of the missions.  Not bad!  The game for me, at the end of the day is a 7.5/10. It's better than the previous one, but I am not sure I'll be playing it again any time soon.  Have you played this game?  If yes, what are your thoughts?
Ο Φοβερός
Comments