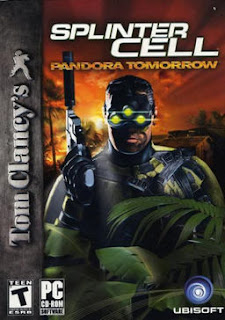 Continuing with my exploration of "the classics" (of two console generations ago), I've been playing Splinter Cell: Pandora Tomorrow. The game originally came out for the original xbox, and I've been playing it on backward compatibility.  I didn't really notice any hickups in the single player game.   The title comes from the main bad guy of the series, Sadono, who calls his sleeper cells daily to put off the planned attacks that they have in store.  Basically, Sadono hits the snooze button every time he calls and tells his peeps Pandora tomorrow (I guess this is his equivalent of serenity now).  Sadono is a classic story of paramilitary gets trained by CIA.  Said paramilitary at some point does not agree with the USA, turns against them. USA then needs to clean up its own mess...

The game on my xbox 360 played on a 4:3 aspect ratio - which was fine for a retro game.  The graphics seemed much better as compared to the original Splinter Cell for the same generation console, and Sam's control seemed a little less jerky.  In the original Sam's body (especially when climbing) seemed a little stiff, but this game was a little more fluid.  Pandora tomorrow also seemed generally more permissive with the fifth freedom as compared to the original in (at least in most of the game), but it was much harder on you with regard to staying off the radar.  Did I detect a little snarkyness from Lambert when he says "Fisher, you're paid to be a ghost - the mission is scrubbed!" - Hmmmm... Also, was there a subtle poke at Metal Gear Solid?  In the penultimate stage, when you're going after Sadono, in the load screen it zooms into Sadono who is looking very Snake like ;-)

The game overall wasn't bad.  I think the story needed a little refining, and the end just felt really rushed.  Sam finds the explosive at the airport, with 10 minutes to go before it goes off and it releases toxins into the air.  It's not enough time to get an NSA team there, but I guess LAPD has a bomb disposal bot on the premises of LAX? And, Sam gets picked up in an SUV and sails into the subset?  M'eh.

Overall, not a bad game. I'd give it a 7/10, and overall I think it holds up well.  There were some typos that should have been caught in the game, and because of the original platform - it has no achievements. Looking forward to playing the last splinter cell I haven't played yet ;-) 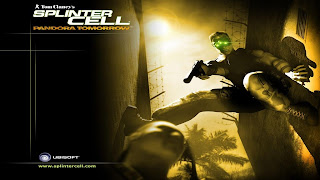