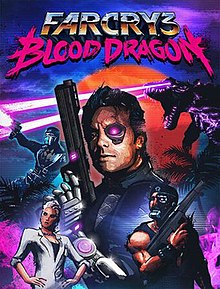 Right after I finished Fac Cry 3, I kicked off the spin off game, Far Cry 3, Blood Dragon, which I finished October 2020

The game is rather short, but it is a ton of fun. The game basically takes the basic structure of Far Cry 3, albeit in a smaller sandbox, and transports you to the "future" by playing a Kyle Reese type of character in a very 80s, terminator-style setting.  The language that's used is very much 80s inspired, the puns are so bad that they are good, and  Sgt. Rex really loved to rub it in every time you die.

This game is basically a run and shoot everything in your path until you get to the end, and be careful to avoid the dinosaurs with freaking lasers on their heads! Someone should make a movie out of this, because it's a thrill ride :-)

Far Cry 3: Blood Dragon is set in a dystopian version of 2007, where the world is suffering the aftermath of a nuclear war. Ubisoft described the game as "an 80s VHS vision of the future" where the player must "get the girl, kill the bad guys, and save the world."

Rex is awoken by Sloan's Canadian assistant Dr. Elizabeth Darling (Grey DeLisle), who, disillusioned with his goals, betrays him. Rex teams up with Dr. Darling to overthrow Sloan's plan to revert the world to a prehistoric-like state with his rockets, armed with the blood of the "blood dragons" that roam the island. After liberating bases, saving scientists, and killing animals, Rex fights Sloan's assistant Dr. Carlyle (Robin Atkin Downes), who has used the blood of blood dragons to turn humans into zombie-like creatures called "the running dead". After Rex fights Dr. Carlyle's cyber soldiers and blood dragons, Dr. Carlyle is killed by his own AI, who had been mistreated and acted out of revenge.

Rex then goes into a parallel dimension, where he fights legions of Colonel Sloan's running dead. Upon defeating them and "testing his might", Rex gets the Killstar, an arm-mounted laser gun that gives Rex the power necessary to defeat Sloan, at the cost of his own vitality. Following a training montage, Rex and Dr. Darling have sex; Darling is abducted the following morning. Rex then makes an assault on Sloan's base with the assistance of the Killstar and later, the Battle Armored Dragon Assault Strike System (B.A.D.A.S.S.).

Rex confronts Sloan who, having programmed Rex, prevents Rex from attacking him. However, Dr. Darling's and Spider's memories remind Rex of his humanity despite his cybernetic nature. With renewed strength, Rex impales Sloan with his robotic hand and fires the Killstar, killing Sloan. Dr. Darling appears immediately after, informing Rex of his success in stopping Sloan's plans, then proceeds to destroy the base. They embrace while looking on at the destruction, only for Darling to look behind with purple eyes and a sinister gaze.. 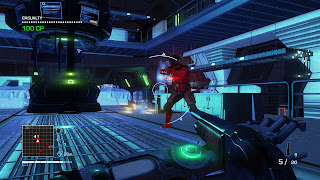 This one, for me, is another 10/10. I'd definitely play this game again in a heartbeat.  It's short, fun, and cheesy. Some stats from the xbox app:

So far my ranking of FarCry games: