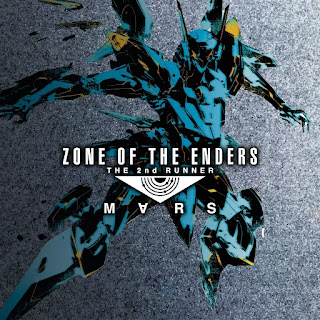 This one is back from December of 2021. Once I finished the first ZoE, I thought I'd jump into the second one.  After about 5 hours of game time, I reached section 6.3 (of this walkthrough),o r 70% through the game, I ended up rage quitting 🤬🤬🤬 (also 😂 because I don't often rage quit).
The thing that finally did me in was trying to bring Ardjet up to the surface and the stupid game kept autolocking on her OR the orbital frames that were attacking me, so when the autolock was on her, I inadvertently did damage, and when the autolock was on the enemy orbital frames it was an inconvenient times (i.e., when I was trying to fly away...so I was looking back while I should have been looking forward.)

The game is set in the year 2174, two years after the events of Zone of the Enders. It follows Dingo Egret, a miner working on Callisto. He inadvertently discovers the Orbital Frame, Jehuty, hidden. When he is attacked by BAHRAM forces who have come to seize it, Dingo climbs into Jehuty and engages the attackers, which include a female Orbital Frame runner named Ken Marinaris. During the battle, Dingo enters the BAHRAM battleship, seemingly defeating Nephtis, an Orbital Frame controlled by an AI program based on Viola's fighting style, but is subdued by Anubis, Jehuty's superior counterpart controlled by Col. Ridley "Nohman" Hardiman, leader of BAHRAM. Nohman requests Dingo to join him once again. When Dingo refuses as his comrades were sacrificed by Nohman years ago, Nohman shoots him and leaves him to die.

However, Ken has Dingo revived and placed inside Jehuty. As Jehuty is acting as a life-support system, if Dingo leaves Jehuty, he will die. She then tells him that she is a UNSF spy, working undercover and needs Dingo's help. Helped by Ken, Dingo escapes the battleship with Taper, a soldier with the UNSF who was hiding within the ship, and heads for Mars. On Mars, Dingo confronts UNSF pilot Leo Stenbuck who is Jehuty's former pilot. Leo reveals the AI A.D.A. is programmed to self-destruct Jehuty in BAHRAM's base Aumaan which forces Dingo to join Leo in his quest to destroy Aumann.[14] After several battles on the planet, Dingo runs into Nephtis once more and battles her. The A.I. within Nephtis possesses Ardjet, forcing Dingo to disable the Orbital Frame to purge the computer virus. Ken climbs into Jehuty and, together, they seek out Lloyd, a BAHRAM scientist who can upgrade Jehuty, allowing it to stand a chance against Anubis.

In a secured complex, Dingo and Ken find Lloyd who tells Dingo to fight him if he wants Jehuty's upgrade. After defeating Lloyd in combat, he has Ken's help to upgrade Jehuty. While Jehuty is being upgraded, Nohman flies in and attacks Dingo. Lloyd helps Dingo able to escape but is killed by Nohman in the process. As Ken is left behind Dingo learns she is actually a BAHRAM member whose father was one of Dingo's former comrades and that his death resulted in her wish to get revenge on Nohman.

Dingo meets up with Leo again, and they travel to Aumaan. Once there, they battle what they think to be Anubis, but it is later revealed to be a decoy with Ken inside. Nohman cripples Jehuty and flees the facility, destroying it. Ken tells Dingo and Leo that Aumaan is actually on Phobos, the largest moon of Mars. The three enter compressed space, where Dingo battles Anubis along the way. Upon reaching Phobos, Dingo does battle with Nohman again, this time destroying Anubis, but not before Nohman can activate Aumaan. Dingo is able to prevent the detonation by throwing Anubis' head into the core, and escapes with Leo. After the battle, Dingo is treated to restore his health. While I did rage quit the game, and I ain't going back to it any time soon, there were some interesting improvements over the first game.  Just like the first game, there were a lot of cutscenes (more in this game I think than before). I think that it was an interesting anime wrapped around a game.  The game elements were also an improvement over the first one, which included some new moves for Jehuty, destructive environments, and more linear play (I was not a fan of the first ZoE's "go into orbit and come down into another city" approach)  made it feel better balanced as a game. The ability to save almost anywhere you wanted was also a major improvement in my book.

The auto-targeting can be good at times, but it is a rather big pain in the rear in most cases, especially when you're trying to evade an enemy.

Finally - here's all the cutscenes from YouTube, if you're like me and want the story, but got fed up with the game 😂

Some Stats (which include the first game, since this was from the HD collection):